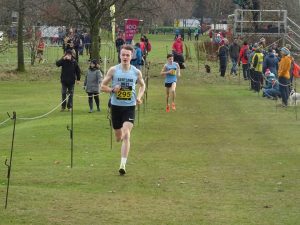 Erin Wallace went in the 4x1500m mixed relay and edged her Scotland U20 foursome into fourth, though they eventually faded to seventh against high-class, and more senior, international competition from GB, Europe and USA. Track star Laura Muir anchored her GB squad to a comfortable win.

In the shadow of Stirling Castle, on a rolling surface of parkland and golf course, Giffnock’s Hamish Armitt won the U17 crown over 5k, just holding off team-mate Jack Patton, as they led West to team victory. West’s U17 girls took silver, with southsiders Helen Chong and Clare Wallace among the counting finishers. West’s U15s claimed both girls and boys crowns over 4k, with Chris Perkins second in the lads’ event, ably backed by Reuben MacDonald and Harris Paterson. 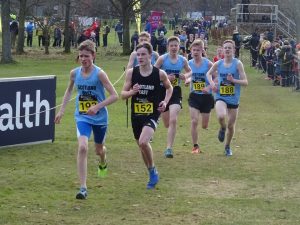 Reuben MacDonald on the left helped his U15 team to gold.

Craig Shennan took individual fourth with a last-gasp dip on the line to help West land the U13 title on countback over 3k, with Alex Robin in 11th. It’s worth noting that Calan Chong, while not counting for the team, finished ahead of the final East counter, which helped level the scores and forced the countback. West U13 girls took team silver, the counting athletes including Amber Wade and Katy Donnelly.

Big well done to all our athletes, who gave their all in an always competitive event that attracts top talent from every corner of the country. Cheers also to the organisers, officials, coaches, supporters, fans, pals and pets who made the journey (and the day). 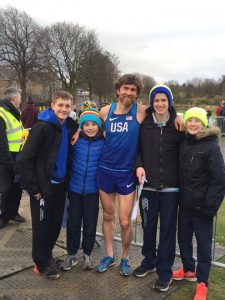