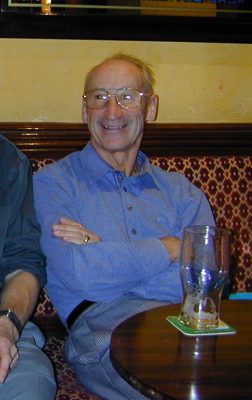 It is with great sadness that the club has to announce that Alistair Shaw, stalwart runner and SA Timekeeper with Giffnock North AC, passed away yesterday morning. He will be remembered as a Giffnock legend for winning many age category titles both at National and International events – truly the end of an era.

I was introduced to Alistair on the start line of one of the Glasgow Marathons in the early eighties by Dr.Ian Kerr who was also to become another GN stalwart. Ian suggested that we should be aiming for a Sub 3 and that we were well suited for such an attempt despite both of us having only ever competed in one previous Marathon – needless to say we failed. This was to be the start of a friendship which lasted decades and when all three of us joined at the inauguration of Giffnock North it taught us what real training was all about.

Alistair immersed himself in Running which apart from his golf seemed to be his main focus in life. He often said to me that he had wished he’d discovered the Sport earlier given that he started Running at the age of 46. He and I were into using Heart monitors as a means of control both in training & competition and with an age difference of exactly 10 years it was easy to keep an eye on our predetermined training bands.

Ever helpful, he was a constant at our Festival of Running both as a Timekeeper and Course measurer and always had time to chat with anyone – I could tell some great stories of his chance meetings with fellow runners.

A prolific trainer he was used to success which came in his various age categories both at Local, National & International level. – World bronze Marathon medal with the UK Vets Team, individual  European half Marathon medal, British Vets Champion (twice) and age category winner of numerous Races including three times at the Dublin Marathon.

He was one of a group invited to take part in a study, at the Victoria Infirmary, as to why Scotland had a high percentage  of ‘Running’ Septuagenarians.

After the loss of his wife, Betty, he struggled to cope and subsequently ended up in care were he passed yesterday.

A real Gentleman in the true sense of the word – it was a privilege to know you and to call you my friend.