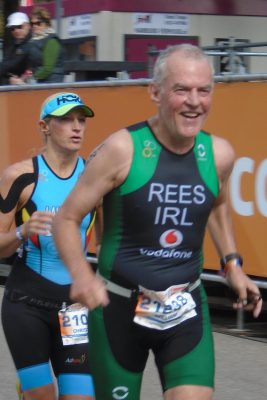 It is with great sadness that we mark the death of long term senior endurance member Bill Rees who passed away earlier this month from a brain tumour.

Bill had a lifelong interest in sports but came to running relatively late.  He originally joined the club in the late 1990s while working at Glasgow University and returned to the club in 2009 after a number of years working overseas.

In his early sixties, Bill decided to try his hand at triathlon.  There was soon no stopping him and he progressed to competing in the European and World Triathlon championships, representing Ireland in the “vintage” age group.

Bill was running with the club as recently as 18 months ago until his diagnosis and remained a regular parkrunner until February this year, completing 224 parkruns in total. While his later runs took him over twice as long as his earlier runs they were all the more impressive for that.

Bill had a varied career as an academic, latterly as Professor of Financial Analysis at Edinburgh University, and loved travel which provided him with a fund of good stories. He was always interesting and entertaining company, encouraging of his fellow athletes but also determined, where possible, to outrun them!

He will be much missed by his friends at the club.

Our thoughts are with Bill’s wife and fellow senior endurance member Sue.  We hope to welcome Sue back into the fold once it is possible for us to run as a group once again.