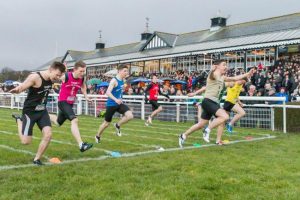 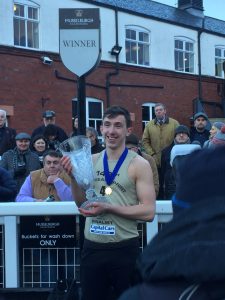 Calum McWilliam won the New Year Sprint handicap race at Musselburgh Racecourse
As the article in the Herald Sport reported
‘ 22 year old Mcwilliam had been unplaced in the last 2 years New Year finals but he was always likely to challenge again.. The final was contested in wet and windy conditions after the weather suddenly worsened but Mcwilliam focused on his lane and overtook Hutchison and Lasswade’s Keiran Reilly before holding off Kelly’s desperate late surge to break the tape first in 11.80.. “It’s still a bit surreal I never thought it would come true smiled Calum after accepting the Winners Chrystal trophy and a cheque for £4000. I’ve been in the last 3 finals here so it was 3rd time lucky. It all worked out perfectly this time. I was just trying to focus and keep tunnel vision, as my coach always tells me. I knew I had it with about 20 metres to go”
Calum added for us that “there is no better feeling in the world!!”
Greg Kelly, the previous champion is Calum’s training partner with coach Gordon Bury.
Well done to Calum from all at Giffnock and to his coach also. We are proud to recognise Calum’s great success and achievement in this prestigious event. An ample reward for his continued dedication and persistence.
Calum still competes with Giffnock as his 1st Claim club but with EKAC on the Highland Games circuit and for his University Glasgow Caledonia. Apologies for the delay in posting this. We had some website problems now resolved.