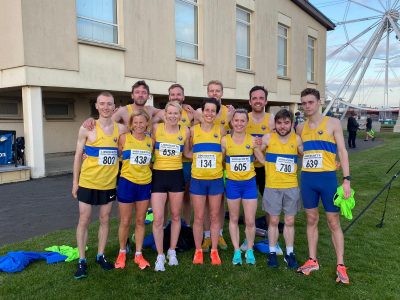 Giffnock North seniors took gold in both the mens and womens races at last night’s Troon 10k. This fast, flat and highly competitive event was back after Covid and Giffnock North senior athletes turned out in force as it featured as one of their club championship races.
Ross Good stormed to a win in the male race, with a superb time of 32.15. This was after taking a slight wrong turn ( too fast for the marshals to see!) which meant he missed his target time of 32 mins, but only by seconds.
Ally Stables, Keiren Mooney and Michael Cross were next across the line for Giffnock in positions 11-13 and strong times all around 35 and 1/2 minutes. Jordan Orr crossed the finish tape in 36.12 meaning GN took 5 of the top 20 places!
Yvonne McNairn led the female race from gun to tape with a time of 36.58, over a minute ahead of second placed Lorna Baird from Kilmarnock.
Allie Chong was next to finish for Giffnock North in 4th place and a time of 38.48, with Sheila Lewis making a fine return to racing in a time of 42.32 taking 9th position and third counter for the club.
Sadly no team prizes are awarded in this event but if they had been, the ladies would have taken team gold and the gents the silver.
Plenty of other strong runs packed behind with Rob Crusher coming close to his pb with a finish time of 39.38, daughter Emily running a sub45 and mum Ann ( not yet a club member😜 making it a family night out)
Coach Alan Stewart was one of 7 men in the v70 category to finish, all of whom dipped under the hour mark.

Lead coach Bernie Campbell watched the race and was delighted to see his athletes perform so well.
“ seeing such strong performances from all the athletes, coupled with great results last Friday and over the weekend was amazing” he said.

The rain stayed off, cash prizes were collected and chips consumed at the end of a successful night for the club down by the seaside.