IF YOU’RE GOING TO WIN a cross country race, why not start early and make it your first one ever, with a District crown for good measure? Eilidh Caldow did just that last Saturday, storming the ramparts of Balloch Castle with a glorious last 100 metres to take the Under 13 Girls title, leading Freya Scobie (3rd) and Aneesa Phillips (4th) to team gold after 3.2 tough kilometres.

Millie Boothman, April Macaulay and Eva Saez were next three home in a terrific squad performance. Take a bow Sarah McNulty, Nicole Yates, Holly Simpson, Erin Reilly, Isabella Wilson, Gabriella Amorati, Beth Adams, Anna Ross, Eva Wilkinson and Niamh McNulty.  (Forgive me if I miss anyone out or if I don’t mention everyone: it was some turnout – full results of all races are here: https://data.opentrack.run/en-gb/x/2021/GBR/westxc/ ).

The Under 13 Boys were next onto the start line. Calum Dick was narrowly beaten into second by East Kilbride’s Angus Wilkinson over their 3.2k of hills, hairpins and mud, but had the consolation of fronting up the title-winning team alongsidePatrick Fraser (5th) and Aaron Reid (6th), ably backed by Cameron Mitchell, Myles Macaulay and Ethan Scobie, who are in with a shout of selection for Team West next month at Irvine’s legendary Beach Park. Finlay Laskey, Joseph Mowat, Matthew Hill (possibly most appropriate surname of the day), Zac Wright and Luca Saez completed a memorable effort from our boys.

The Under 15 Girls’ 4k was introduced by the announcer as the category in which Giffnock would be going for eightstraight team wins … no pressure, girls! The class of 2021 know no fear, however, and Freya Campbell powered up thelast, demanding climb to take the individual title and lead Scarlett Wilson (5th) and Mili Macfarlane (8th) to team goldahead of Kilbarchan. Lauren McPherson, Katy Donnelly, Ruth Walsh, Saoirse McNulty and Ella McWilliams all packed brilliantly into the top twenty, and while we’re about it, take your hat off to Isla Munro, the O’Donoghue sisters Lucy and Hazel, Ellie Stewart, Erin Digby, Lexie Martin and Gabrielle Paddison.

Another twisty turny treacherous 4.4k saw the Under 15 Boys claim team gold number four with Craig Shennan seeing off the not inconsiderable challenge of Kilbarchan’s Oliver Patton for the individual title. Alasdair Nugent and Jack Wallace weren’t far behind, in third and fourth to join Craig on the podium, with Calan Chong, James Mowat and Ruari Laskey also in the first ten, which guarantees the invitation to run for West District in the Inter Districts next month in Irvine.

Most dramatic finale of the day? Surely it’s Hannah Ryding’s last few strides with Garscube’s redoubtable Louisa Brown in the Under 17 Women’s race. Going up the dreaded last incline, Hannah was thirty or forty metres back but she never gave in. Louisa’s trademark front running tactic started to implode. They hit the line so finely divided the judges gave them the same time, with Louisa getting the nod for gold, but both showing first in the published results and awarded equal points for their teams. The distance stated was 5.5k but several devices show over 6k, so full marks to the two of them for their tenacity. Valencia Wright raced home fourth to continue her return to form; Esme Dougall posted sixth to nail the club’s team gold number five. Immediately behind Esme were team-mates Emma McLennan and Kate Paul, with Tuscany Wright and Ella Youngs 13th and 14th to put themselves in the frame for discretionary places at Irvine. Megan Smith completed a super squad performance in 27th.Such winning ways can’t go on, can they? Oh yes they can(come on, it’s nearly Christmas).

The Under 17 Men delivered West title number six with stunning running over 5.5k from Reuben Macdonald in first, Cameron Green third and Cameron Deverill fourth, the sweep interrupted only by VP Glasgow’s Fraser Gilmour. Reuben’s win was all the more commendable for his recovering from falling on one of the tight, sloping turns. Alex Robin (5th), Matthew Knak (10th) and Josh Adams (11th) would have been second team overall if rules allowed. Glen Griffiths, Innes McPherson, Josh Kenny (in his first race for the club, good shift, Josh), and James Leaf all contributed to another exceptional squad effort.

Miriam Gilbride and Kirsten O’Donoghue flew the flag for Giffnock North in the U20s placing sixth and eighth, but call-offs meant no team opportunity. We weren’t alone: no clubs fielded full teams in this category, and only Giffnock North and Kilmarnock had two runners.

Ethan Carolan was our sole U20 male representative, a solid fifth over 6.5k, deservedly assuring himself of the offer of a West District team vest. Special applause for Ethan, who’s juggling first year studies away at Aberdeen Universitywith keeping his training going – first class commitment.Cambuslang were the only club to field a full U20 team and claimed the title with all three individual medals. 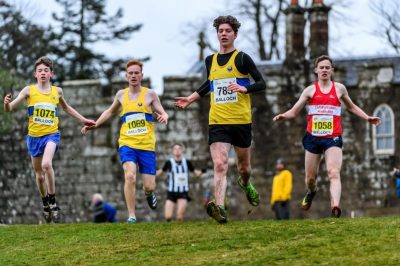 Yvonne McNairn blitzed round the 8.5 for a great fifth place in the Senior Ladies race (one place and six seconds behind our very own Lynn McKenna, in the colours of Glasgow Uni) leading Jill, Mary and Nicole McBeath to a strong overall sixth in that category.

The Masters Men powered over the by now well-ploughed course to a good seventh team finish out of 21, the counters comprising John O’Donnell, Ted Gourley (second M55) and David Shaw. 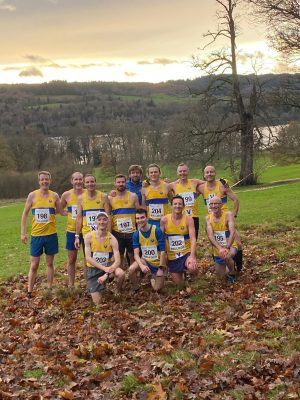 Further highlights include the presence of Lachie Stewart,presenting medals and generally adding a sense of continuity and pure class to the occasion: it’s half a century and more since he won that Commonwealth Games 10,000 metre gold in Edinburgh, but the moment still resounds down the decades. Lachie’s 28 minutes 11.71 seconds finish in that race remains the Scottish Native 10,000m track record. Many thanks to our coach Davy Lang for bringing Lachie along, much appreciated. 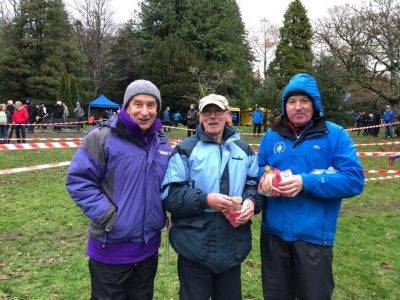 Treemendous: you know it’s proper cross-country when there’s a huge oak tree right in the middle of the first 100 metres. With the wisdom of all Ents, this tree opted to wear a hi-viz jacket for the day and everyone ran safely by before, er, branching right.

Our thanks go to the indomitable organisers and host clubs Westerlands and Dumbarton; to the coaches and supporters; and to all the volunteers who stepped in at late notice to marshal, officiate and make the event possible. The weather was dreich, but the sport shone.

END. Until the next one.

We  can’t wait ! Thanks Croy for another XC excellent summary to accompany an exceptional day at the races for Giffnock North.