Erin Wallace has had another trip Down Under to compete on the Gold Coast. Erin our Tri-Athlete goes from strength to strength.
We asked Gordon Wallace Erins dad for an update.
“Erin recently came 5th in the European Junior Triathlon championships in Estonia, and followed this up by winning the London Junior Female Triathlon. This gained her automatic selection for the GB Junior Female team who will compete at the World Finals in the Gold Coast. This sees the top 60 Female Junior triathletes in the world compete in the biggest championship race of the season. This takes place in the early hours of Saturday 15th September. She is currently in the middle of 2 weeks preparation with the GB team out there with all that involves”

The club wishes Erin the very best of luck in Australia. Also great news to hear that Erin is entered for the club Track & Field Championships as she has done every year since she joined the club and is looking forward to competing there. What a star!

A selection below of photos of a few of her athletics exploits.

Award winner at Scottish Athletics event 2017 with Coach Dudley Walker
On track, Indoor, Outdoor , that photo from the Bahamas when winning the 1500m and over XC representing GB Juniors. 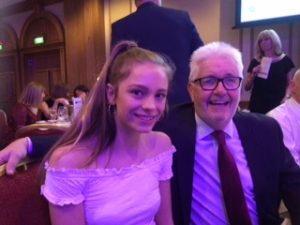