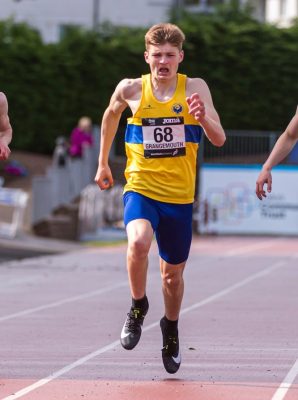 Finlay Waugh talking to his Coach, Ryan McAllister,  gives us another insight into his development as an athlete and the demands of training through COVID-19

When I was younger, I tried a variety of different sports like football and swimming, but when I was 7 I started athletics and ever since then I’ve loved training and competing in the sport. When first starting in the sport I was doing run, jump and throws sessions, with Annan and District Athletics Club a couple of times a week and competing at small local competitions. Early on I decided that sprinting was my favourite event and started to train 3 times a week with some of the older athletes at my club.

In 2016, after about 6 years training with the club in Annan I moved into a new training group, where I was training 4 times a week travelling into Lanarkshire and Dumfries(to try and get a more specialised level of coaching).

In 2018 I moved clubs to Giffnock to get more opportunity for higher level competition, and also to get the chance to compete in the likes of the national relays which I had never previously had the chance to take part in. Last year I moved training groups again into Ryan’s training group where I am training 5-6 times a week. One of my favourite moments so far was being invited to compete at the British Athletics Indoor championships in Glasgow last year.

When we first went into lockdown I think a lot of people found it much harder to stay focused and motivated than I did because most people are so used to having a group around them, but for me nothing really changed as for a large amount of my time in athletics I have trained under these circumstances, so I managed to cope with it fine and it hasn’t affected me too much.  It has been frustrating though, as I had only just joined Ryan’s group prior to Covid so I have not yet managed to get regular training sessions which has made technical work a struggle to get in.

When it came to leaving school, athletics played a massive part in where and what I decided to study. I am currently studying Sports Therapy at City of Glasgow College, and a huge part of why I decided to study there was due to the fact that being in Glasgow was going to allow me the best opportunity to continue developing as an athlete, as it would allow me much more regular access to my coach. I decided to go to college as it is two and a half days teaching a week, which gives me a lot more time and freedom for training.

Being involved in the academy has been great, to be recognised after a successful season in 2019 was rewarding. It’s great being part of a group of talented and likeminded athletes. Unfortunately, because of Covid we haven’t managed to meet in person much and experience a lot of what the academy is usually like, but we have still had a lot of zoom calls which have been good and educational.

One area I recognise as needing focused on this year is my starts and acceleration. These areas are things that until the last year I have never really done too much specific training in so there is certainly a lot of work to be done there. Also, as I think anyone who has watched me run can see my running mechanics are still in need of a lot of work so that is something I’m looking to focus on in order to continue improving. I take a lot of confidence in the fact I have run the times I have whilst still having these big weaknesses because it means there is a lot of room for improvement to bring my times down significantly.

Outdoor season this year I am just hoping to run some fast times. I always really enjoy competing at championships and that is where my fastest times always come so being able to run at Scottish and English championships again should they go ahead will be a great opportunity to run the fast times. I would also love to try and get selected for any internationals if they go ahead.

Thanks very much Finlay for this great insight after the most challenging year .