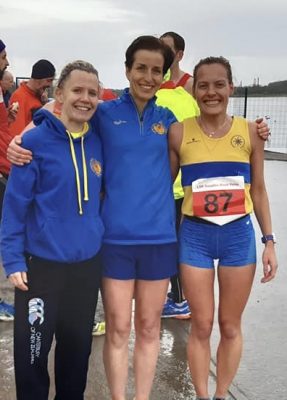 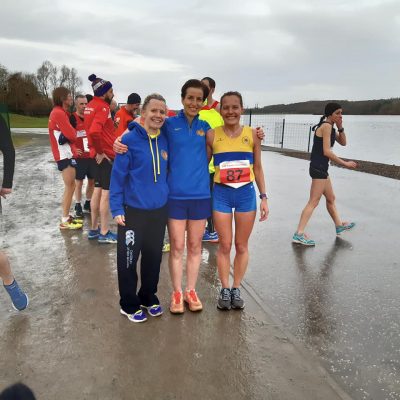 The usual cold and dreich weather prevailed for the annual Scottish Veteran Harriers Club Road Relays Championships on Sunday 26 January. Thankfully the rain cleared up a little before the gun went at 11am sending the first leg runners away for a lap of Strathclyde Park Loch.
The course is a fairly flat 3.7 mile circuit of the water, with a sneaky hilly section hidden in the hills on the far side of the Loch to catch newbies unaware!
The men and women set off together, with the female teams consisting of 3 athletes, and the male teams comprising four.

Giffnock North entered two teams in each race. Yvonne MacNairn and Kathleen McLachlan led off for the ladies’ teams, with Yvonne putting in the second fastest female lap time of 22.07 to come in first female, 4s ahead of PH racing’s Kristin Lownie.
Allie Chong and Angie Carson took the virtual batons for the second leg, with GN extending their lead. Jill Smylie took over for the first team with around 3 and a half minutes lead, which was enough to hold off Michelle Sandison from Springburn Harriers, who had cruelly overtaken JIll near the finish after a similar race last year.
Sheila Lewis ran the third fastest v50 leg of the day to bring home the second ladies team in 8th position.

The men’s teams were led off by Ruairidh MacLean and Scott Wilson, with Iain Carroll, Michael Cross and Cris Walsh finishing off for the A team in a fantastic 6th place, and Graeme Paterson, Greig Glendinning and Ted Gourley bringing the B team home in 18th.

Yvonne, Allie and Jill were delighted with their victory, and would have been even more delighted to bring the trophy back to the GHA cabinet, had it not been misplaced by previous winners ( unknown) so they had to be content with a cash prize and the knowledge Giffnock had at last triumphed in this event after several years of coming close.

Thanks to Allie Chong for Report after a great win ! Well done all the Vet Athletes !