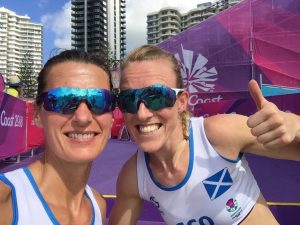 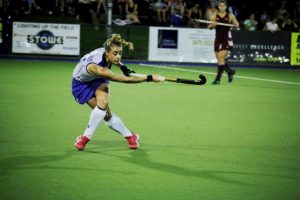 No image of Alison as yet , one of her teammates in action

As well as Nikki Manson and David Smith representing Team Scotland in High Jump in the Gold Coast and Erin Wallace in the Mixed Relay Triathlon, we are also pleased to highlight the exploits of 2 other former Giffnock Athletes- namely Lynne Beattie in Beach Volleyball and – Alison Howie making yet another appearance in the Scottish women’s Hockey Team.
Both athletes trained under Dudley Walker in the Junior Endurance Squad, making their mark in medal winning XC Teams and on the Track.
Lynne, with her teammate, enjoyed a decisive win in their match today( along with a win for the Scottish Men’s Team too ) while Alison’s Team held Canada to a draw in their game today after a difficult match with New Zealand which sadly ended in defeat.
Well done to Lynne, an Olympian in the GB Volleyball Team at London 2012, and a previous guest and presenter at our Club 25th Anniversary Junior Awards Night.
Well done also to Alison for this current representative honour -one of many international selections she has gained in an illustrious career.