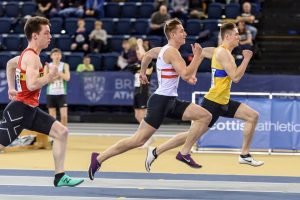 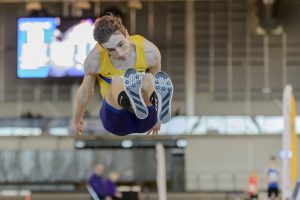 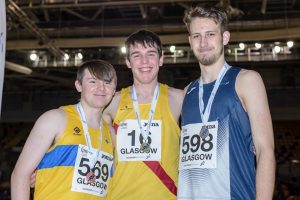 Giffnock North athletes great success at the U20 Scottish Athletics Indoor Championships at the Emirates arena on 2nd and 3rd of February.
Fraser Angus can’t stop winning at the moment. Having secured the Seniors Men’s 200m title last week, he turned his attention to the 60m U20 event. Fraser posted a PB in the semi-final and then again in the final to take Gold in a time of 7.05s. But he wasn’t alone in the final. Just missing out on the medals in a very tight finish was Alessandro Schenini – 4rth in 7.14 and Scot Wylie 5th in 7.19, both setting new PBs. More on Alessandro later!
Another sprint podium finish was secured by Freya Menzies in the 400m. She was the slowest to qualify for the final but tore up the form book and her own pb to come flying thru for silver in 58.32s.
In the field events we had more medal success.
Back to Alessandro…like Fraser Angus, he had secured Gold at the Senior Champs last week in his specialist event, the Long Jump. This week he jumped into silver with 7.34m. Both Alessandro and the winner beat the previous Championship Best Performance (CBP) of 7.12. In the shot putt David Lees secured bronze with a throw of 9.97m.
Back at the sprints Eve Denholm (6th, 7.96) and Megan Busby (7th, 8.00s) both set PBs in final of the Woman’s 60m, with Freya Cowan making it through to the semi-final (8.25s), only 1/100th of a second outside her recent PB. In the 200m, Holly Shearer made it to her first individual National Final (6th), setting a new PB of 26.42s on the way. Andy Moses also competed in the 60m.
In the middle-distance events, Orla Lang finished 5th in the 800m straight final (2:24.03) and Ben Shaw made it through to the 1500m final, finishing 7th (4:15.37).
And finally, and by no means least, Sam Young jumped 1.83m to finish 5th in the HJ final.
All our athletes put in tremendous performances and we congratulate them all. A huge vote of thanks is also due to everyone that supported our U20 Championship competitors both now and throughout their athletics careers. This extends to coaches, Scottish Athletics officials (how can you win a gold medal if there is no one there to fire the gun?), friends, families and loved ones.
And what next….? For some there is the Scottish Schools this coming week, Scottish and British University Champs, Indoor League Finals and Relay Champs. The season ain’t over yet!
Photos courtesy of Bobby Gavin