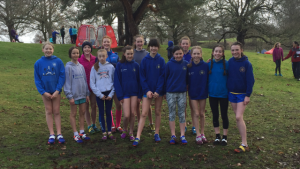 And here is the before  photo of the U13 Girls Squad 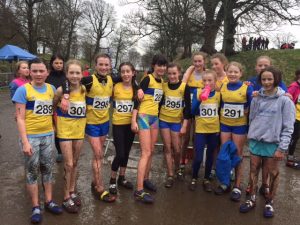 AT A SOGGY BOGGY Callendar Park, Falkirk, Giffnock North AAC’s teams put in a storming shift across the age groups from Junior to Senior, and waded ashore with four team awards, three individual medals and a raft of stories all set in the finest, wettest, muddiest traditions of the sport.

The day began ominously with officials debating safety issues, but the forecast 40-mile-an-hour winds and torrential rain didn’t happen, so with a minor shifting of the start and finish areas towards the shallows, and repeated pleas not to paddle in the newly-formed loch in front of Callendar House, the day’s adventures were launched on time.

Giffnock’s U17 boys earned a hard-won bronze over 6k, Andrew Love in fifth to lead home Ben Shaw, Michael Lowrie and Nikolae Gajic, Nikolai recovering from a mid-race fall to help his squad to the medals. Harry Nimmo and Nic Boyle chased them home.

For the fifth year in a row Giffnock put their name on the U15 Girl’s trophy, as Heather Barnes blazed to the finish in second behind VP Glasgow’s irrepressible Lily-Ann Evans-Haggerty, backed by excellent runs from Helen Chong (4th), Kate Richardson (8th) and Francesca Davidson (15th). If rules allowed, the southsiders’ next four athletes – Jill Carswell, Sofia Kirkpatrick, Clare Wallace and Emma Chamberlain – would have won bronze. The squad placed eight athletes in the top 31.

Hamish Armitt powered away from the U15 Boys field to an emphatic individual victory over 4.2k, while club-mates Ethan Carolan, Andrew Robertson and Eoghan O’Donnell helped him race to a commendable fourth team place, supported by Donald Maclean and Chris Watson-Sweeney.

In the U13 category Giffnock’s boys took a fine team silver, with Reuben Macdonald, Jacob Luc, Harris Paterson and Cameron Green the stars over 3.2k soggy kilometres – Harris was another victim of the slippery conditions, enduring a fall but still getting back up to battle to the finish.

The boys’ counterparts in the girls’ race, Erin and Isla Ward, Niamh McWilliams, Eva Chong and an impressive squad all fought gamely over the same distance but had to be content with fourth behind high-class opposition from across Scotland.

UNDER 20s and SENIORS

Keir Carolan flew the flag strongly for Giffnock’s U20s over a testing 7.6k, before Andy Bonnar led the southsiders’ senior men – in ridiculously glorious sunshine by this point – to 19th place over 10k, well supported by Chris Greenhalgh, Jason Steele, Ted Gourley, Scott Wilson and Graeme Croll. Jill Smyllie was first home for the women’s team that comprised herself, Allie Chong, Catriona Gourley and Alison Matthews, who together placed 23rd, also over 10k (this was the first time the men and women have contested these championships over equal distances).

To paraphrase James Taylor’s lyrics from his classic album Mud Slide Slim, we were “slippin’ and a-slidin’” to glory or more likely glaury. Thanks to all officials, stewards, announcers, coaches, tent technicians, pool attendants, parents, pals, drookit dookers, playful plowterers and most of all everyone who ran, splashed, splodged and splattered their way around.

THE END (until next year)

Many  great photos posted on Scottish Athletics Social Media and in earlier posts. If anyone has any more they want  to share , please contact us via the Facebook page