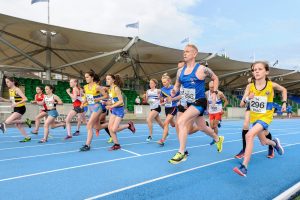 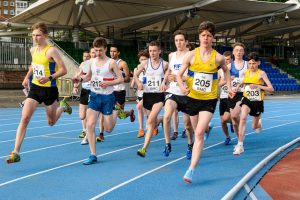 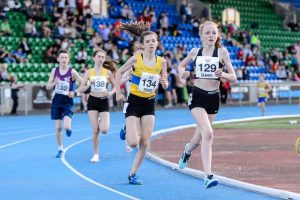 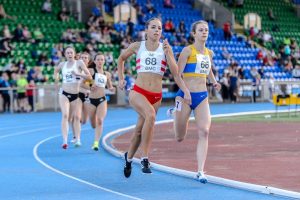 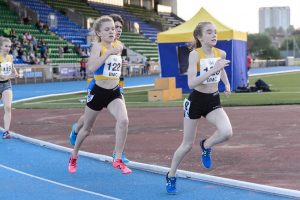 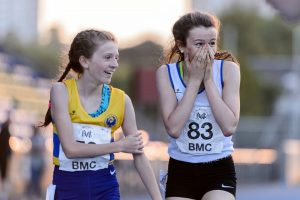 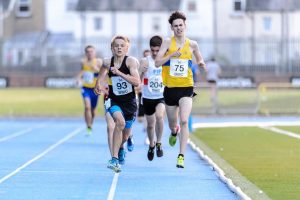 Report from Dudley Walker . All photos courtesy of Bobby Gavin

The rarely used Scotstoun Stadium held the second of two athletics events in a week on Friday 1st of June….following the Sprints Night on Wednesday it was the turn of the endurance athletes to stretch their legs and chase fast times!
The Middle Distance and Endurance athletes made the most of the warm weather,the superbly organised event and the wonderful spread of home baking to capture an enormous amount of PBs.
First up was Hannah Ryding making her debut over 3000m.She enjoyed the experience so well that she ran the second fastest time over that distance in Scotland this year in the under 15 age group…and 10th on the UK rankings.Ethan Carolan powered his way to a 9:18.16 personal best.
Also gaining PBs over the distance were Eva Chong,Lara Cassidy and Kieran Killen.
The 800s were well paced and pulled many of our athletes through to much improved times.The under 15 girls squad were all in fine form with all of them achieving either a SB or a PB.Abby Thomson,Zoe Flower,Ella McGregor,Kate Paul,Valencia Wright,Isla Scott all produced improved times with Nuala O’Donnell not far away with a season’s best.Most improved was Valencia on her GN debut with a 7 second PB…down to 2:18.99,
Not to be outdone the under 15 boys in the shape of Jacob,Harris,Reuben and Kian all came up trumps with quick times.Jacob getting ever closer to sub 2 with a time of 2:01.73.most improved was Kian McConville who reduced his 800m best by almost 10 seconds to 2:21.91.Eoghan O’Donnell improved to 2:8.44 with Lewis Mitchell getting close to a PB with a time of 2:11.55
Erin Wallace had her first outing this season over 800m and recorded 2:8.63 which takes her to 5th in the UK under 20 rankings.

Thanks to Dudley for the report

Well done to all the Middle Distance athletes and their coaches!More photos, videos and reports on GAA facebook and twitter feed.
This was the 1st GAA Outdoor Miler Meet of the season.
Entries have just opened for the 2nd one on 27th July.