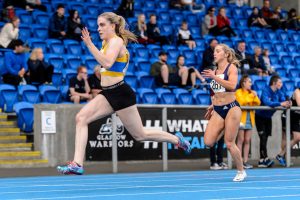 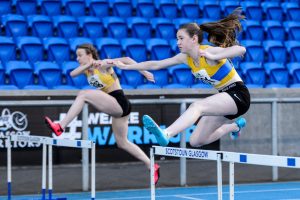 Rachel Callan in the Hurdles relay 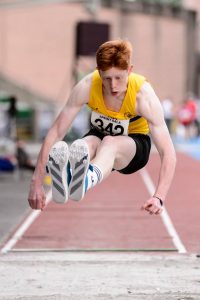 There was a big turnout at the Glasgow Athletic Association Sprint Gala held at Scotstoun Stadium last night with roughly 2 dozen runners from Giffnock North. It was a nice evening for running but although the wind indicator believed there to be a generally insignificant headwind it was blustery enough to make PB’s a rarity.
Pride of place must go to Jenna Wrisberg who ran her first 100 Metres since a long injury layoff and won the elite Women’s race in 12.04 – fast enough to win a share of the prize pot! Whist Jenna was cashing in at the front, behind her the unfortunate Alyson Bell crashed to the ground 20 meters from the line and left a fair amount of skin on the track. She was smiling afterwards but our best wishes go out to her and we hope the damage is only superficial.
In the elite men’s race, Adam Clayton was 2nd in 11.05 and repeated the feat in the second round of 100’s later in the evening but in 11.07 this time.
In addition to Jenna’s victory there were heat wins for Jason Wu in 11.74 and Jake Vulcan in 13.21. Most could not improve in the second round of 100’s but Jason improved to 11.67 and Andy Moses from 11.84 to 11.72. Russell Lawson also shaved off another 0.05 seconds to win his second round heat in a PB of 11.81. Others to improve in the second round were Rachel Callan (13.75) and Jake Vulkan with a PB of 13.09. Runners to join the PB Club were Murray Fotheringham (12.04), Jacob Luc (12.51) and Emily Williams (15.69).
In between the two rounds of 100 Metres were the 300’s. There were PB’s for Matthew Forbes (37.44), Murray Fotheringham (37.72) and Ella McGregor (45.80) together with a Seasons Best for Freya Menzies of 41.82. Murray’s time also appears to be an Under 17 Club Record.
Whilst the track was in full swing, there were Long and High Jump competitions to keep the crowd occupied. As this report went to press, the results were noy yet finalises but there was some solid jumping from Lauren Agnew and a new PB for Reuben Nairne 6.41M.
The evening finale was a rarely seen end-to-end hurdle relay with Reuben and Murray teaming up with some good pals from the North to scoop the £100 prize.
A great evening was had by all and the cakes were magnificent. Many thanks to the organisers and the officials for making it all run so smoothly and well done to all that participated.

And many thanks to Craig for the full report . Link to Results below . More photos and reports on GAA facebook and Twitter