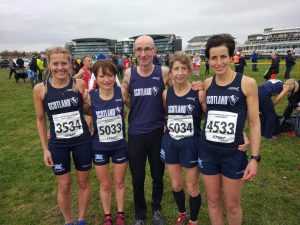 Five of Giffnock North’s seniors headed down to Southport last weekend for the British and Irish Masters XC championships. This annual event has been running since 1988 and sees the best XC runners from Scotland, England, Wales, Northern Ireland and Ireland compete over 6 or 8k, depending on age.
The other home nations allow vets from age 35 so Jill Smylie picked up her first Scotland vest to compete this year. Their W35 team contained the winner of this race, Michelle Sandison from Springburn Harriers, who led a strong Scottish contingent to team silver.
Allie Chong was next up in the W45 category. She ran as well as could be expected following a knee injury, and their team took home the silver behind England and Ireland.
Mary McCutcheon and Shona Donnelly ran in the W50 category. Mary, as always, had a very fast run, coming in 6th in the age group and second Scot behind Ana Richardson who just missed out on an individual bronze. Shona put in a solid performance to help the team to bronze medals.
Ted Gourley had a fantastic run in the M55 race over a gruelling 8k. He finished second Scot and again took home a team bronze medal.
All but one Scottish age group team won team medals in a particularly successful meet for the SVHC team. England again won the overall prizes, but were far less dominant than previous years, especially in the younger age groups.
The races finished with the open event, open to any member of SVHC and Russell Whittington committed himself well over the flat fast course. His support for the earlier races was also much appreciated!
Any Giffnock North members who fancy competing next year should join the SVHC and take part in the trials which take place every September. It’s a chance to race against the very best in a pure age group setting, and to enjoy a real national team atmosphere amongst some top athletes.

Congratulations to all our Super Vets  ! And many thanks to Allie for the Report