AND BEHOLD it did rain, and there was darkness on the face of the course at Balloch. Not to mention a hilliness and a muddiness and a slitheriness, as we did gather by Loch Lomond for the West District Championships. Dreich? I’ll give you dreich.

Also, when I say ‘hilliness’, I mean really hilly. After the first pancake-flat 100 metres this course reared up until vertical and quite possibly steeper. Then there was the sequence of hairpin bends on a camber on the way back down … then the zig-zaggy bit by the Lochside before more hairpins on the way back up again, prior to the plummet straight down to the finish. Phew. Bit challenging as they say (in the Royal Marines). Well, if you ran on this course, in this weather, then you can race anywhere. I applaud you bigly.

First into the fray were the U13 Girls and they raced to a hard-earned bronze team medal over 3.2k. Freya Campbell caught the leader with fifty metres to go and hit the front, only for her rival to dredge up a response from the mud and pip our girl with only yards to go. Brilliant individual silver for Freya, ably supported by Hazel O’Donoghue and Caitlin McGeachy, who was one place and one second ahead of team-mate Hannah Sluman.

The U13 Boys have been a joy to watch for ages now and again they did not disappoint. Craig Shennan raced Kilbarchan’s Oliver Patton shoulder to shoulder for almost the whole 3.2k, but had to make do with Giffnock’s second individual silver of the day. The lads proceeded to put another seven athletes into the top 16:
• Alasdair Nugent 3rd
• Cameron Harris 4th
• Calan Chong 5th
• Tristan Robin 8th
• Jack Wallace 10th
• James Mowatt 14th
• Mitchell Scott 16th
At the West it’s only three to count for team prizes though, so this year’s District honour goes to Craig, Alasdair and Cameron, but such an outstanding overall team performance (and that wasn’t the full squad) can be gauged by the fact that had rules allowed, our fourth, fifth and sixth finishers would have taken team silver. But rules is rules is rules.

Hannah Ryding landed the club’s first individual title of the day, in the U15 4k. Hannah was hotly pursued by past age-group champion Valencia Wright in second and Kate Paul in fourth to secure the U15 Girls team crown for the seventh year in a row. Esme Dougal, Melissa McIntosh (who made the journey from Carlisle to turn out for the club) and Tuscany Wright would have been fourth team, claiming 9th, 15th and 21st places.

Reuben Macdonald is now only the second Giffnock North AC U15 boy ever to win the West individual title, after a race-long 4k battle with Fraser Gilmour of VP Glasgow. Just two seconds separated the lads at the end, and the club-crown duel was continuing behind them: Alex Robin outsprinted VPG’s next finisher for fifth, before Matthew Knak delivered an immense effort to come in one spot behind VPG’s third counter … one place either way by any of our boys and the title would have gone northside of the city … but they prevailed by a single point and we retain our title for another season. The previous GN winner of this category is Hamish Armitt, who happened this year to be away in Portugal, running strongly for GB&NI U20s.

Under 17 girl Zoe Flower put in a powerhouse performance over a gruelling 5.5k, as the weather started to deteriorate (darkness at lunchtime: we demand floodlit cross country), coming home a good fourth, leading Helen Chong (12th), Miriam Gilbride (15th) and Kirsten O’Donnell (19th) to team silver behind Garscube. Extra shout for Miriam who fell in the closing stages but got up and fought on to close out in a medal position. There were many fallers on the day, the wet conditions making the downhill cambers and tight bends even more demanding than usual.

The Under 20 Women’s race saw Giffnock North athletes in two different teams, with McKenna sisters Lynn (2nd overall) and Charlotte (5th) helping their Glasgow University team to gold after an impressive 6.5k effort. Withdrawals through illness meant Giffnock didn’t have a full team, but Clare Wallace and Rhona Mowatt flew the flag: Rhona was rewarded with a hard-earned individual bronze, while Clare raced into 7th place.

Calum Young led the Under 20s to a fine team bronze over 6.5k. Undeterred by two falls – “I was going fine until I slid full length ten metres sideways straight off the course then had to run back up to join in again” – Calum still finished 8th. Andrew Robertson (17th) and Keiran Mooney (19th) joined him on a very muddy podium (okay there was no podium, it had sunk without trace) the trio edging out Law & District on countback. 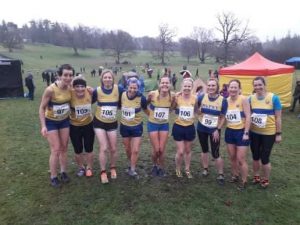 The course having been well and truly chewed up by seven races, the Senior/ Masters Men were unleashed onto 8.5k of torture, and our gents responded splendidly with a fine seventh place in highly competitive company. Take a bow, Chris Greenhalgh, Crispin Walsh, Oliver Traynor, Jordan Orr, David Shaw and Luke Chamberlain. Chris, Cris and David comprised the third-place Masters’ team, for another feather in the club’s cap (or sou’wester, more like). Applause also to Andy Macdonald for his 15th place in the V40 category and to Rob Crusher, 11th in the V50s.

It’s rumoured that the West District Home Baking Prize 2019 went to Oliver Traynor, but he hid the cake tin from me, so I can’t really comment.

Well done everyone, you were part of a race that will go down in cross country folklore as one of the steepest, wettest, twistiest and turniest ever. Thanks as always to the officials, supporters, coaches, volunteers and our centenary-celebrating hosts, Dumbarton AAC, whose very small membership put on a truly memorable, welcoming show. This is the hard-working grassroots base that helps put athletes on the way to European, World and Olympic appearances.

Thanks Croy for the excellent   report from Balloch. More excellent photos from Bobby Gavin via Scottish Athletics website and Social Media .