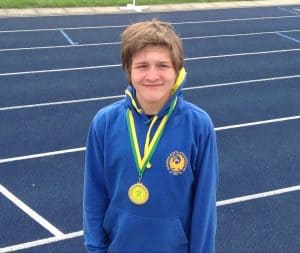 All photos courtesy of Bobby Gavin and Scottish Athletics

The Age group Championships were held in Aberdeen this weekend and those who ventured North on day one were welcomed with a warm day , sunny spells and a moderate breeze.

Our first Girls on the track were Katie Foss and Sophie Haldane who cruised through to the final of the Under 20 Women’s 400 Metres.
They returned for the final later in the day and strong running by Sophie looked to have won her the Gold but Katie had not yet lost belief. She found some extra strength down the home straight and clawed her way back to Sophie. The line eventually came for both girls and it was too close too call. Rather remarkably they were inseparable on the photo finish and both were awarded Gold medals.

Meanwhile Daniel Martin had lived up to his top seeding in the Under 13 Boys Shot Putt taking Gold with 9.54 Metres.

He returned to the track and grabbed his second Gold with a dominant run in the Boys 75 Metre Hurdles setting a new PB of 12.15 seconds.

Over at the high Jump , Murray Fotheringham was stepping up an age group to compete at Under 20 ‘s after his triumph at the Under 17 championships last week. Another confident performance gave the 15 year old a remarkable Gold with a new Giffnock Record of 2:03 Metres.

Erin Campbell grabbed another Gold for Giffnock in the Women’s Sprint Hurdles.

It’s not all about winning medals and lots of our athletes have their all in search of PB performances.

In the Under 13 Boys , first year Ryan Davie just failed at a new PB and came 4th – losing a bronze by the narrowest of margins on countback. He also gave Javelin a go but needs at bit more training in that event.

David Lees was 4th in the Under 20 Men’s Shot Putt but was a bit below par in the discus.

Emily Watson reached the final of the Under 13 Girls Sprint Hurdles finishing in a very creditable 5th place. She also competed in the Javelin placing 7th.

Kyle McLean in his first year as an Under 20 put in a great performance to reach the final.

Tuscany Wright battled through her pre-race nerves to produce a huge PB in the Under 13 Girls 800 Metres, breaking 2:50 for the first time. She was just ahead of Abigail Flower who came home in 2:53 and also gave High Jump a go.

Thansk Craig for reporting from Aberdeen

On Day 2 Giffnock Medallists included
Sophie Haldane took her 2nd Gold medal of the weekend in the U20 W 200m. Another race where the same time was given for 1st & 2nd place but the Gold going to Sophie this time.
Kyle Mclean took Silver in the U20 M 200m
David Lees with Bronze in U20 Javelin
Isla Fotheringham with Gold in the U15G Pole Vault
Ross O’Brien with Silver in the U15, 1500m
Jennifer Dallas with Bronze in the U15 G Shot Putt

Congratulations to all our athletes who travelled to Aberdeen , those above medalled, all those who made Finals , narrowly missed the podium or bettered their PBs. Hope we haven’t missed anyone out over the 2 days.