The Life and Fast Times of a Giffnock North athlete 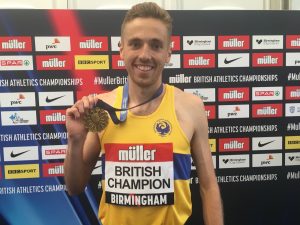 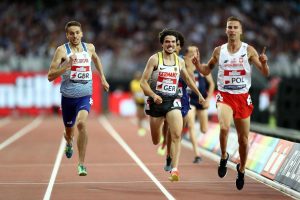 As can be seen from the above, 2018 was a breakthrough year for Neil. He completed his college running career where he competed for five years for Virginia Polytechnic Institute and State University (Virginia Tech) by anchoring his DMR team to victory in the NCAA championships. The DMR is a unique event in which the four team members run legs of 1200m, 400m. 800m and one mile. It’s very highly regarded and this was not only the first time that Virginia Tech had won it but was also the first national track title ever secured by the University.

With his outdoor eligibility finished Neil was able to concentrate on achieving the times and places he needed to gain a place in the British team for the European Championships – his biggest target for the season. To do so he had to bring his 1500m PB down from 3.39.92 to under the qualifying standard of 3.37.5 and, to guarantee selection, finish first or second in the trials. Having not managed to achieve the qualifying time in the lead up to the trials he first had to concentrate on placing there.

Scots again dominated the final, taking all the medals, with Neil missing out on the second-place spot and automatic qualifying position by .01 of a second to Jake Wightman, who subsequently went on to win the bronze medal in the Euro Champs. Neil finishing third left the decision up to the selectors even if he managed to secure the qualifying time which he duly did in the exotically named Lignano Sabbiadoro, Italy, running 3.36.54 on 11 July. The selectors, however decided to pick the athlete who had finished fourth in the trials for the Euro Championships.

Racing back from disappointment 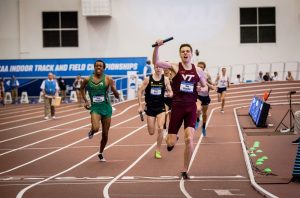 Missing out on Berlin, although a huge disappointment, gave Neil the opportunity to compete in the Scottish Championships where he won his first national title, just holding off a strong challenge from one of the next generation of Scottish middle-distance runners, Sol Sweeney.

Neil was selected to represent GB&NI in the first ever staging of the Athletics World Cup, held in London’s magnificent Olympic Stadium. Neil finished a very creditable third, earning a bronze medal and helping the GB team to an overall third place in the competition.

Neil’s performance also saw him selected to compete in his first Diamond League event which was held just a week later in the same venue. In a world class field, Neil finished eighth, improving his PB to 3.35.98.

Having graduated in Mechanical Engineering, Neil moved to Eugene, Oregon or ‘Tracktown USA’ as it’s known, to join the Oregon Track Club Elite where he is teammates with the likes of Nijel Amos, Hassan Mead and Francine Nyonsaba.

At the start of 2019, his first big target for was to qualify for the British Team to compete in the 2019 European Championships being held in Glasgow. With the same selection rules in place the stakes were high, at the British Championships in Birmingham in early February with a top two finish again required to guarantee a place on the team. Neil timed his run perfectly in the final to overtake Elliot Giles to become British 1500m Champion and book his place on the team. The article below from the Oregon Track Club Elite’s website gives some further detail on his season to date. 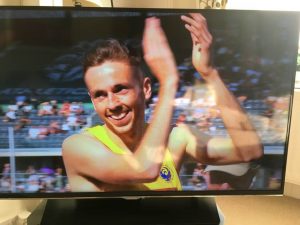 In just five indoor races, the 24-year-old native of Scotland has lowered his indoor personal best in the 1,500 meters by more than six seconds, claimed his first British Indoor national title in that event, and secured a berth in the European Athletics Indoor Championships, March 1-3, in his hometown of Glasgow.

He couldn’t wait to compete on the global stage in front of his most ardent supporters.

“It’s difficult to put into words how special it will be to compete in these Championships in Glasgow,” Gourley said. “It will be my first time competing in a senior international championship, and I have the privilege of doing so on a track I have trained at countless times. I’ll also be running in front of many of my friends and family, so I’m determined to defend the house against Europe’s best milers.”

The former standout at Virginia Tech tuned up for the European Championships by posting an indoor 1,500m PR of 3 minutes, 38.32 seconds at the Muller Birmingham Indoor Grand Prix last Saturday (Feb. 16). He set his previous best of 3:44.76 in winning the 1,500m title at the British Indoor Championships.

Still, Gourley was far from satisfied with his eighth-place performance in an epic indoor race that featured a world record of 3:31.04 by Ethiopia’s Samuel Tefera; the third-fastest time in history by Ethiopian runner-up Yomif Kejelcha at 3:31.58; an Australian national record; and 10 personal bests among the 14 finishers.

“I’m sure at some point I’ll look back on this race and be glad that I was a part of such a historic occasion,” Gourley said. 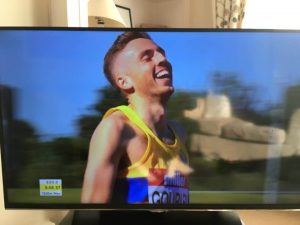 “But to be completely honest, my initial reaction was that I couldn’t believe that I’d just lost by seven seconds. It’s been a long time since I’ve been that far behind over 1,500m! Time trial style races have never been a strength of mine but I am determined to improve on this and being involved in this level of competition will allow me to do so.”

In March 2019 Neil was just savouring this chance to compete in the Emirates before a home crowd in the GB Euro Team. He qualified for the final with an absolutely commanding performance. He looked, to all those watching, to be in line for a medal before the cruellest of blows as he was struck down with a virus which meant he was unable to take his place in that final. If Neil’s family, friends and supporters from all over were hugely disappointed we could only begin to imagine how Neil felt then and continued to feel subsequently.

It’s the measure of Neil that he returned to his US Training base and track club and settled down to training hard again and set himself the task of qualifying for selection for the GB Team in the 1500m for the World Athletics Champs in September 2019 in Doha.

Having achieved the qualifying time in Seattle in June, he then needed to take 1st or second place at the British Trials in Birmingham on 25th August. This he duly did in a thrilling, sensational win taking the title, gold medal and earning that spot in the company of what must be the most talented band of Scottish 1500m athletes ever. A just reward for years of dedication, commitment, hard work on the track and a huge amount of talent which he modestly seeks to downplay in interviews constantly extolling the virtues and talents of his competitors and their contribution to his success.

The entire body at Giffnock North Athletes, Coaches, Officials Parents and Board salute Neil’s enormous achievements and wish him the very best in Doha. Go Neil! 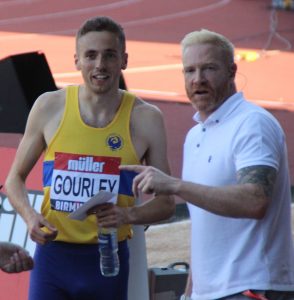 He was the British Champion in the years 1948, 1949,1950 and 1952 right up to Roger Bannister’s historic breaking of the 4 minute mile. It had been intended that Bill would have presented the card in person but he had suffered a fall and was unable to be present. The card was therefore presented on his behalf by Mike Fleet.

Thanks to Bill Nankeville and to Mike Fleet for this historic addition to the recognition of Neil’s success and achievement.

This report is compiled from various sources, but mostly with the input of Neil’s very proud dad Ronnie Gourley. We recognise fully ,as does Neil frequently  in his comments, the input and support required from his parents, his brother Rob, previous coaches at Giffnock North ,especially Gordon Lockie and other supporters over the years which has assisted Neil along with his new back up Team on this journey. 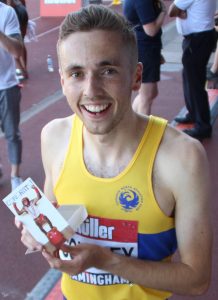