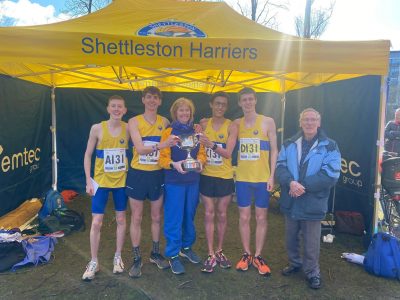 MODERN TEENAGERS, EH? WHAT ARE THEY LIKE? Demonstrating zero respect for their elders, a young Giffnock North team ran to one of the club’s most notable victories last Saturday in Glasgow Green, winning the iconic Allan Scally Road Relays ahead of more than 120 foursomes from across Scotland.

Conditions were sunny, cool, dry and windless on the relatively flat, out-and-back circuit. The setting was perfect and so was Cameron Green’s start. From the gun, Cameron(age 16) launched himself into the lead group and returned a close fifth in a scintillating 14 minute 56 seconds PB (Falkirk’s senior man Kane Elliott ran 14:31 on this leg, which was a new course record, but not for long).

Cameron handed over to GB International Duncan Robinson (elder statesman of the team at 19) who returned first in an outstanding new course record 14 minutes 26 seconds, eclipsing the pre-race mark of 14:34.

Third leg runner Cameron Deverill (16) was out on his own but stayed strong for 15:26 to consolidate our lead and fire Reuben Macdonald (16) away on the anchor leg. Reuben set off with 40 seconds on the opposition which included, as we were well aware, Stirling University’s Alastair Marshall, who had been a good third at the National XC just seven days previously.

Now, 15 minutes and 15 seconds can feel like an extremelylong time when there’s a big silver pot at stake, and you know there’s a red-hot international racer pursuing your athlete …fear not, Reuben held his nerve, held the lead and soon was holding the trophy, having powered home well clear to a rapturous welcome from team-mates and an appreciative crowd. No finer way or day for a younger generation to add to the history of a time-honoured occasion. 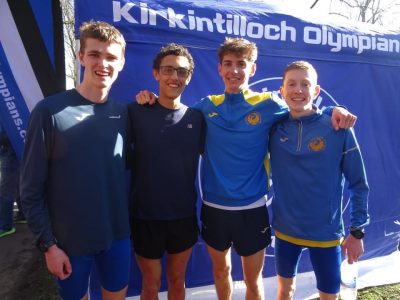 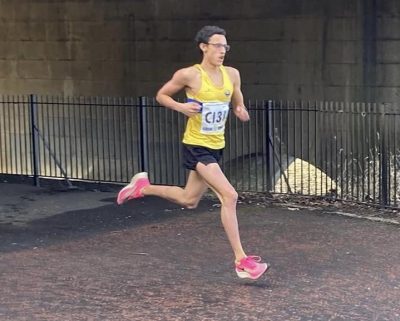 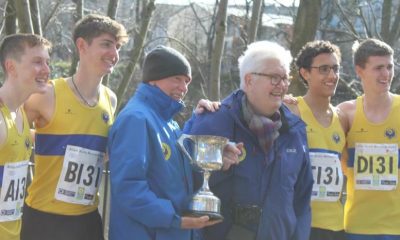 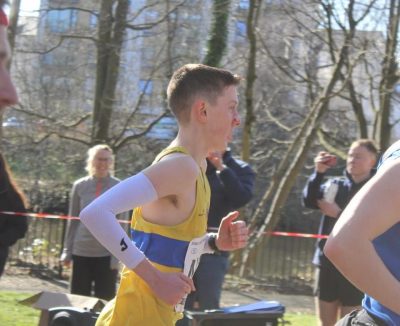 A little further back, Giffnock’s Seniors were making hard-fought contributions to the action. Our B Team of Ross Good, Kieren Mooney, Jordan Orr and Conor Drummond were 14th;C Team Ruairidh Maclean, Michael Cross, David Shaw and Ally Stables were 33rd; Yvonne McNairn (sustaining great winter form with 17:52), Emily Crusher, Shona Donnelly and Julia Cash were 14th Ladies; Andrew Holloway, Rob Crusher and James Taggart were all well under 19 minutes for their 5ks but unfortunately didn’t have a fourth man.

In unaccustomed colours, the irrepressible Lynn McKenna’s 18:09 helped earn Glasgow University to team bronze in the Scottish University Championships, which were a significant part of the day’s sport. Ethan Carolan’s 15:30 was fastest for Aberdeen University (27th team) and former GN junior Luke Nelson anchored them with 16:55. Blayne Wright’s 16:04 helped Edinburgh University’s Men’s A squad take bronze. And let’s hear it for our very own Coach Anji Carson, whoanchored her Dental Hospital team. If I’ve missed anyone, apologies.

Hi, Dudley asked me to tweak the very last para, which now reads:

WHAT’S IN A CUP? Allan Scally was an outstanding athlete who set aside professional running to become a coach at Shettleston Harriers (back then, you couldn’t take money for running and be a member of an amateur club). Since 1969 road relays have been held in Allan’s memory and are a treasured part of Scotland’s running heritage. The buying of a suitably impressive silver trophy required the setting up of a fundraising committee, which featured a certain John Walker – father of Dudley. So, in one way the lads really did bring the trophy home

Thanks Croy for another splendid report

Various people for the photos!

Lachie Stewart for his legacy and

Dudley’s Dad for his role & contribution to the Trophy purchase !