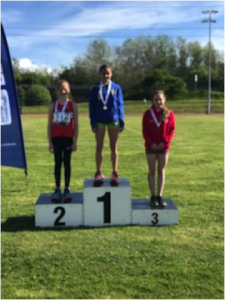 Angelica Mayer, 100m U13 gold
Kosta del Kilmarnock – AKA West Districts Championships 12/13th May REPORT FROM Gerry Duggan & Sara Lang
Day1
Who would have thought the sun would have shone and it would have been dry?!
There were picnic rugs, deck chairs , sunburnt faces and 22 medals on display by the end of the day on Saturday.
13 gold medals, 6 silver and 3 bronze; each and every one fought for with determination and pride .
Its difficult to highlight any one performance or even all of them but suffice to say we had medals at every single age group and at almost every type of event. There were U13s who even got 2 medals ( Daniel Martin) . There were a plethora of Giffnock athletes competing against one another at times ..in particular the U20 M 100m final and 2 sets of High Jump were a Giffnock 1 and 2 ( U17 and Sen M).
Gold medals were won by;
Reuben Nairne 100m Hurdles
Daniel Martin 75m Hurdles and Shot Put
Nikolai Gajic 800m
Adam Clayton 100m
Jacob Luc 800m
Angelica Mayer 100m
Alyson Bell 100m
Nikki Manson Javelin
Alessandro Schenini Long Jump
Chris Mackay High Jump
Murray Fotheringham High Jump
Rachel Alexander Long Jump
Silver medals;
Orla Lang 800m
Catherine Palmer High Jump
Ryan Davie Long Jump
Ethan Dear High Jump
Sam Young High Jump
Rachel Callan Long Jump
Bronze Medals;
Kyle Maclean 100m
Matt Forbes 400m
Jennifer Dallas Shot Put
Day 2 – Who knew it could be sunny in Kilmarnock two days running?
The day started with hurdles. In the combined U17/u20/Senior Men combined final. Murray Fotheringham was the only u17 with a new pb of 59.98. Next was Freya Menzies winning the combined U20/Senior Woman final in 65.87, her first competition at this distance. And just to keep the hurdles medals rolling in, Rachel Callan just missed out on Gold by .04s in the U17 Womans 300mH, coming second with a time of 47.14, her second medal of the champs
The 200m was a busy event for Giffnock across all the age groups.
5 U13 girls competed – Angelica Mayer, Josie Reilly, Eilidh Veitch, Cartriona Bentley and Leah Rigley. Angelica, Josie, Catriona and Eilidh progressed to the semi finals. In the final Angelica was second (28.33) – an addition to her gold from the 100m yesterday – and Josie 7th (29.98) into a headwind off 9.2m/s! Brilliant performance all round. Ellis Nairne was the only U13 Boy and just missed the final finishing 9th fastest in the heats with 30.71s.
In the U15s Alyson Bell, Jenifer Torrance, Ella McGregor, Chloe Drummond and Rachel Morran all competed in girls event. Alyson made the final and tore up the track to win in 26.71. A double sprint gold. In the boys event, Jacob Luc and Michael Nolan competed. Unfortunately Michael was disqualified for running out of lane – windy day? – but Jacob won bronze in the final with 25.20s. A second medal for Jacob.
With no boys in the U17 200m, all focus was on the girls. Eve Denholm and Rachel Callan cruised through the heats before Eve secured gold in the final (26.84) and Rachel 7th (27.44). This was Rachel’s third final of the champs and the only one in which she didn’t medal. Well done both.
In the U20’s 200m Womans Final Holly Shearer secured Bronze (27.80) and in an exact repeat of the 100m result Adam Clayton won gold (22.32) and Kyle McLean Bronze (23.28).
Brilliant effort for all 200m competitors in such blustery conditions
The other track event on Day 2 was the 1500m. All age groups were run as straight finals. Kirsty Wylie was our only U13 girl finishing in a time of 5.45.80 and in the U13 Boys, Calan Chong (5.15.99) and James Wylie (5.54.36). Well done to our U13s. Our U15 girls made their mark through Zoe Flower securing a bronze (4.52.00) and Abbey Thomas (5.05.23) and Hannah Riding (5.08.81) not far behind in in 5th and 7th. The u17 Girls were next up. Jill Carswell (5.03.71) just missed out on bronze in 4th, with Francesca Davidson 5th and (5.04.54) and Helen Chong 8th (5.18.53). Nikolai Gajic just missed 800/1500m double gold coming 2nd in the u20 1500m in a tight battle all the way down the home straight (4.09.72). A close battle was expected in the U15 boys 1500m. Harris Paterson and Ross O’Brien were in a group of three that broke early from the pack. A great race saw Harris (4.24.74) winning silver and Ross (4.26.26) bronze. Reuben MacDonald, Hugh Shiels and Aaron McGilvery battled through to 6th, 9th and 10th places.
Giffnock had a great day in the field.
First to the throws. In the hammer U15 Imogen Maher (23.71m) just finished out of the medals with a consistent series of throws. Going one better, U17 Iris Williams was delighted to secure her first championship medal with a bronze, throwing 26.34m.
Our Javelin throwers didn’t want to miss the medal party and won a double gold. u13 Emily Watson won with 21.09m and U15 Jennifer Dallas won with 26.66m, her second medal of the champs. U13 Tara Menon also threw well with 9.57m. Jennifer rounded off her day with a 4rth place in the discuss with 20.73m.
In the jumps U17 Murray Fotheringham leapt his way to silver (6.86m) – his third medal of the champs – and Sam Young was 4rth (5.79) in the Long Jump. U13 Ellis Nairne was 1 place off a medal in the High Jump (1.26m).
So in total Giffnock North won 19 Golds, 11 silvers and 9 Bronze. Will done to all our medal winners and competitors.

Please please forgive us if there are errors or omissions in this report. It is produced by those who were officiating, coaching and/or parenting ( and sometimes all three!) and it’s so difficult to capture it all. Well done to all of you..not just the medal winners . There were many many pbs and lots of athletes who made finals all credit to them and their coaches.

Many thanks to Gerry and Sara for this report. We would echo their congratulations and also their request for budding journalists at out next club events & competitions!