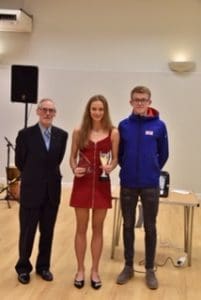 It was the athletic version of A Christmas Carol at our Annual Awards Dinner on Saturday night, but instead of ghosts, we had heroes past, present and future in attendance.
Our Hero of the Past, and joint guest of honour, was Lachie Stewart, Scotland’s 10,000m gold medallist from the 1970 Edinburgh Commonwealth Games. We were treated to video footage of Lachie charging down the back-straight to win his medal as he was being introduced to the attendees. A recent inductee into Scottish Athletics Hall of Fame, Lachie complemented the club for all its recent achievements and for developing such a strong young athlete section.
The other guest of honour and Hero of the Present, was our very own Luke Traynor. Luke has been tearing up the road racing circuit across Europe, winning the Ceske Budejovice Half Marathon, finishing second in the Manchester Half Marathon & third in the Great Scottish Run.
And why have one Hero of the Present when you can have two? We were delighted that Erin Wallace, World Junior Triathlon silver medallist and 1500m CYG Winner  was able to join us too.
Luke and Lachie  raced through the presentation of 30 plus Club awards, ranging from Under 11 to V55 Masters, [including all the National Title winners certificates which required a production line effort from Graham Dunn ] before finishing the awards section of the evening by presenting Erin with her Scottish Athletics Under 20 Athlete of the Year Award which she had missed out on receiving earlier due to training commitments.
While we congratulate all our award winners, listed below, we also salute everyone at the club who has trained and competed over the past year.
Medals and certificates awarded, the starter’s gun was fired for the fun part of the evening. Pausing only briefly to fuel up from the buffet and bar we swapped our spikes for dance shoes and took to the floor for some serious ceilidh dancing. The band was fantastic and the dance floor was full all night long.
Now you may be wondering about the Heroes of the Future? We were delighted that so many of our Junior Section were able to join us at the Awards Night. They burned off more energy on the Dance Floor than they do at a training session and a few may even have set a personal best or two in the process! This group of young men and women will be our Heroes of the Future, whether winning National or International medals, competing and coaching for Giffnock North or simply maintaining an enthusiasm for the sport we all love.

We hope everyone enjoyed the evening and hope the coming year brings more success for Giffnock North that we can celebrate next year. A huge vote of thanks to all those who organised and helped make the night such a great success. 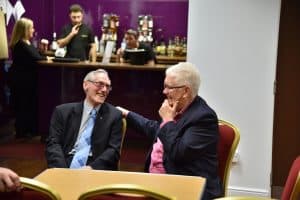 Special thanks also to Dawn Armitt for her role in organising, and Dudley Walker, our ace MC and Coach to the XC Squads as ever, here sharing memories of athletics with Lachie, his former clubmate at Shettleston Harriers. David Chong for taking all the photos and to all the others who helped to ensure we had a great night recognising the efforts and achievements of all the athletes. But special thanks reserved for Lachie Stewart who at 75 looks as fit as a fiddle and who regaled Dudley and Billy with his amazing tales of competing abroad and finding the prizes were such items as a fridge! From Spain to Glasgow not really possible !!

VIEW ALL THE PHOTOGRAPHS HERE