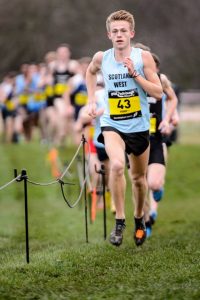 Luke Traynor celebrates his third GB Vest at XC following his selection for Team GB 2019 for the World Cross Country.

Luke’s passport has been well used in the last 12 months in his travels throughout Europe to compete in places such as Ireland, France,Spain,Monaco and the Czech Republic. His placings and times have been improving as he continues to enhance his profile as an athlete.

Next up on the 30th of March is the World Cross Championships in Aarhus,Denmark where he lines up for Team G.B having earned selection via the recent trial race in Loughborough.  Luke’s earlier GB XC vests were won at the Euro XC Champs in Budapest in 2012 as a member of the Junior Team and in Toulon-Hyeres,France in December 2015.  I travelled over to Budapest in 2012 to cheer Luke on at what must have been the coldest XC race I have ever been to…….so cold that my camera seized up and had to be revived by regular warming up under my woolly hat.

He’s come a long way since his competitive debut at the Shettleston Open Graded at the end of August in 2008 where he ran his first ever 3000m in a time of 9:57.9………his PB is now 7:53.88!
It’s been a long and somewhat winding road for him via Caledonian University where he earned a BSc in Environmental Management and then onto Tulsa University where he gained an MA in Education.  His two year stint in Tulsa saw him earn All American Honours and numerous other accolades…but apart from anything else he got a flavour of life as a full time athlete…the demands, the sacrifices and the discipline required.  At present he’s juggling part time work and as near as dam it, full time training.  He’s still very much a Giffnock man who trains with the club and helps out wherever he can.

PS……A sponsor would be wonderful to help help him to achieve his goal of being on the start line in Tokyo next year.