After most of the juniors had finished, just as the weather was closing in, the seniors took to the muddy course in Kilmarnock yesterday.
Churned to a quagmire in places, it was a challenging run, and slightly longer than advertised!
Mary McCutcheon had a strong run from the gun and was the first Giffnock female across the line, with Allie Chong one place behind her. Mary’s run made her the clear winner in the FV50 category – another medal for her trophy collection.
Frances Lowrie and Kathleen McLachlan made up the ladies team, finishing in 5th spot, with Mary, Allie and Kathleen claiming silver in the Masters team category.
Chris Greenhalgh led the Giffnock men round the hilly 8.5k in the men’s race, finishing in 46th place. Jordan Orr had a strong run as Giffnock’s second counter and Luke Chamberlain, Ted Gourley, John O’Donnell and Jason Steele made up the rest of the team, who finished in 7th spot. The men’s Masters Team were just punched out of the medals by one point, finishing just behind rivals Garscube.
All in all 20 seniors competed boding well for the Nationals in February, where even greater numbers are hoped for. 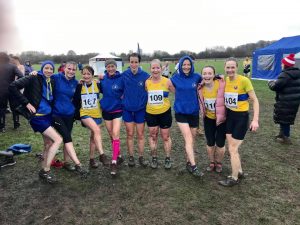 Thanks to Allie Chong for reporting for the Club Seniors and Masters .We can only echo her sentiments for an enhanced turn out for the Nationals .
Well done all the club athletes but especially Mary and the masters silver team medallists Allie & Kathleen adding to the weekend haul of medals.
Provisional results :