Thanks to Gerry Duggan for this report

Another round of brilliant personal performances at the Men’s League today. Despite the limited number athletes and events in which we are able to compete, we were lying 5th with only the discus and relay to be scored. The finalised result will be forwarded as soon as they are available

We had a great day in the jumps. Not only did Sam Young PB in both the HJ (1.88) and TJ (11.88), he offered tremendous support to his team mate Calum Rogers (first outdoor competition this season) who added a remarkable 10cm to his PB at 1.70. Not to be outdone, Neil Hutchison jumped a Seasons Best with 5.69. Unfortunately Calum twisted his knee in the TJ. We all wish you a speedy recovery.

In the throws, Neil Hutchison was in great form throwing Seasons Best in both the SP and Javelin with 8.83 and 36.42 respectively. We are sure he would have been able to do the same in the discuss, but he had miss his final throw to take part in the relay.

A change of clothing brought on another PB in the one lap race. Ditching his side split middle distance shorts for sprinters Lycra, Eoghan O’Donnell took his 400m PB down to 54.88. Lewis Mitchell was a true team performer, getting round his 400m despite feeling unwell.

And then the relays.

Our 4×100 team of Neil (who had just come off the discuss pit), Greg (who had just finished a 5000), Lewis (who was still feeling terrible) and Luke ( a self-confessed 10,000m runner) did a remarkable job in getting the baton round final time and position to be confirmed

Our 4×400 team (Eoghan, Ethan, Andrew and Sam) put in a remarkable performance to finish 4th.

While everyone did a great job , the backbone of the today’s team was U17 – Andrew Robertson, Luke Nelson, Ethan Carolan, Eogahn O’Donnell, Lewis Mitchell, Calum Rogers and Sam Young. I can’t praise their enthusiasm, team spririt and sheer gutsy performances highly enough. (Greg Turner and Neil Hutchison wish they were still U17!)

A word of thanks to our officials – Graham Dunn, Garry Paterson and Danny O’Donnell. Without your help and support it would not be possible to run these events. Graham Dunn, a proud Englishman, sacrificed watching the Panama World Cup match live today to be with us at Grangemouth today. 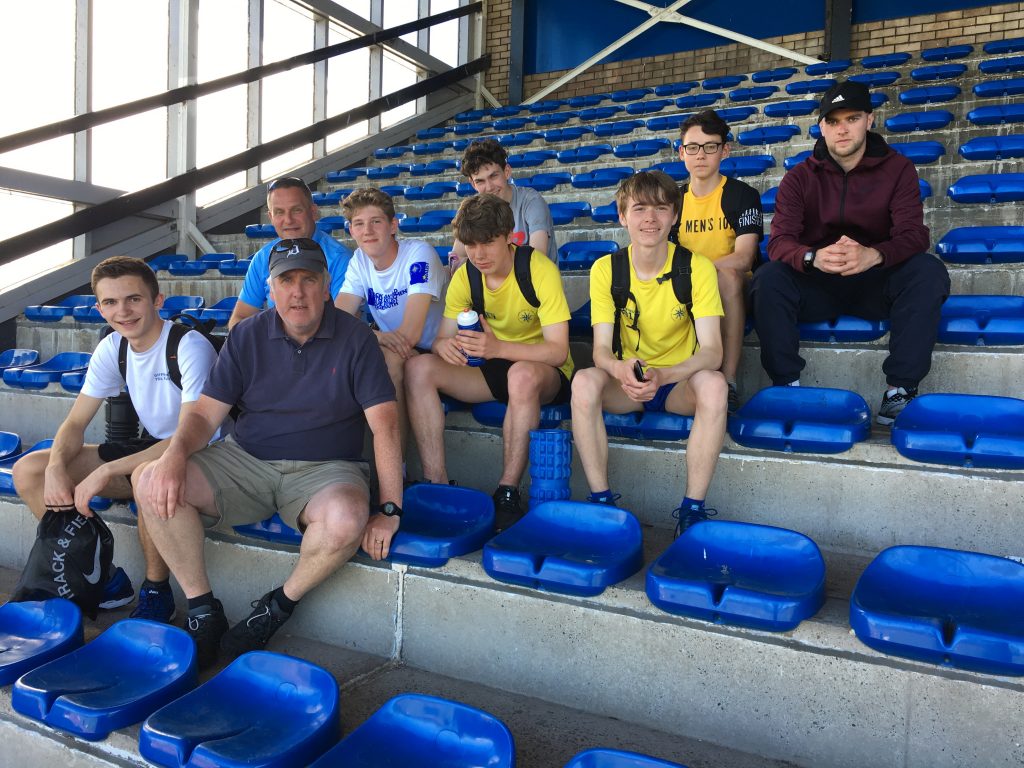 The attached picture shows todays squad and officials, minus Greg Turner (curled up in a corner somewhere after a 1500, 5000 and 4×100 in quick succession), Graham Dunn (racing away to watch the England game on Catch-up TV before anyone told him the result), Calum Rogers (already back home with his knee on ice) and Team Manager Gerry Duggan (behind the camera).

Also, in a guest 800m race Neil Gourley was just edged into second place by Chris O’Hare, only 200th of second separating them.