Two Crowns at the Palace

No, I’m not referring to Macbeth or Robert the Bruce, who were both proclaimed king at Scone Palace. I’m talking about the coronation of two of Giffnock North AC’s cross-country teams at the Lindsays Scottish National XC Relays, hosted in the spacious – and largely flat if a bit bumpy – acres of the Palace estate in Perthshire. 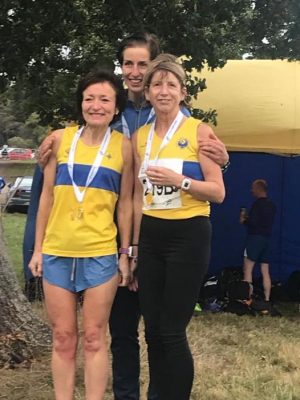 Let’s go ladies first: well done, Allie Chong, Shona Donnelly and Mary McCutcheon, who claimed the Ladies National O50 crown, seeing off Edinburgh AC by 3.5 seconds over the 4k circuit, aggregating 48 minutes 6.5 seconds. Full marks to the team for their keen awareness of the lettering worn on the back of veteran and masters athletes – it does help!

Good wishes to Andy Munro, who pulled up injured on his lap – get well soon, Andy! 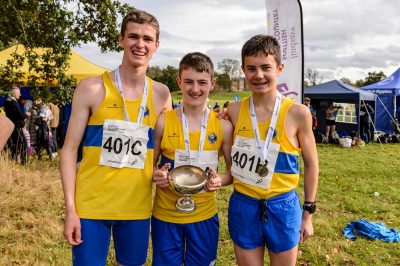 Our Junior Boys were also splendid gold medallists, in imperious style, launched by U13 Calum Dick on first leg. Holding off a determined challenge from East Kilbride, Calum handed over to U15 Craig Shennan who delivered a lead fit for any king to Reuben Macdonald, who duly made no mistake over the third and final 2.5k lap. Reuben joins a certain Callum Hawkins in having won this event at U13, U15 and U17 levels. Calum and Craig were fastest U13 and U15 runners on the day.

Behind the Boys A trio, the B team of Aaron Reid, Alasdair Nugent and Cameron Deverill chased down runner after runner to clinch bronze behind Kilbarchan. Cameron, who recorded the second fastest U17 Boys lap of the day, confessed afterwards that he lost count of how many athletes were in front of him and didn’t know he was among the medals until he was over the line. (One Olympic rower once analysed his medal-winning race as, “It was just heads down, and A to B as fast as we could go, and that was it.” Sounds simple …) The Junior Boys had seven teams in the top 24. 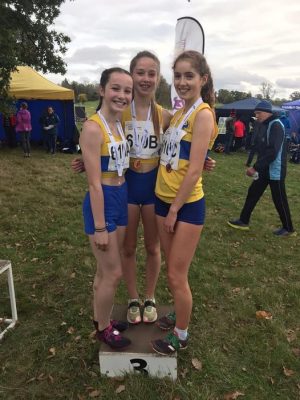 You can seldom outshine Giffnock’s Junior Girls, and Freya Scobie, Freya Campbell and Esme Dougallalso splendidly put the club on the podium with third behind a powerhouse Inverness outfit and Team East Lothian. Giffnock’s girls finished with another six teams in the top 29: impressive packing by any standard.

GB&NI athlete Erin Wallace turned out in the black and gold of her Glasgow Uni team, and anchored them to bronze: good to see other club members and former members racing well for their universities – well done, Ben Shaw and Ross Gray! If I’ve missed anyone, apologies.

Final award of the day has to be Star Baker: step up Ollie Traynor for your Millionaire’s Shortcake and Sticky Flapjacks, and Caroline Wright for the homemade tablet. Surely these are superfoods?

Thank you, one and all, for your attendance, tent wrangling, cheering, clapping, taping of spikes, untaping of spikes, form-filling, form re-filling, team shepherding … cheers, and here’s to the Short Course Championships at Lanark Racecourse on 6th November. Expect fireworks from all our teams! Hey, Duncan Robinson’s dog is called Rocket … has to be a good omen!