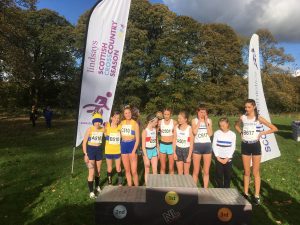 Report from Croy Thomson
The gentle rolling flower meadows of Cumbernauld … no, hold on, the scenic flatlands … no, the merciless vertical barricades … that’s more like it … yes we were back at Cumbernauld House Park,to unleash more than sixty of our fine young athletes across the tilting, twisting, turning, slithery hills of the National Cross Country Relay Championships. In near perfect autumn conditions, our junior generation did not flinch and did not disappoint.

Top honours must surely go to the Boys A Team, who made it three titles in a row by leading from gun to tape. Craig Shennan came home first on the U13 leg, narrowly ahead of B Team racer Alasdair Nugent. Reuben Macdonald maintained the lead as Central AC edged into second. U17 anchorman Harris Paterson delivered the coup de grace with a fine eight minutes 31 seconds effort over the 2.5k course. Fife AC emerged from deep to claim second, while our B Team of Nugent, Cameron Deverill and Ross O’Brien fought hard but couldn’t quite hold off Central, who snatched the bronze.
If you’re a fan of strength in depth, then consider this: the boys’ teams also finished fifth and seventh, to confirm the dominant form shown at the West Districts, where the club monopolised the junior boys medals.
Our girls put up a spellbinding (note that word for later) show in their race, with their usual initial fine disregard for team selections. Freya Campbell of Team C blitzed home first on the first leg, to send Kate Paul out in the lead. At this point the race commentator rather cheekily asked if Giffnock make team selections by pulling names out of a hat: I honestly did try to find the man, and if I had I’d have said, “Yes, for Team Selections we use a Harry Potter Sorting Hat, because all our kids are magic.” I couldn’t find the commentator, but anyway I was too enthralled watching Katy Donnelly (A) and Amber Wade (B) sending out their team-mates in pursuit of glory.
The A’s U15 leg runner Hannah Ryding conjured up a stellar lap of nine minutes 22 seconds to send U17 Julia Cash off in first place, but hard as she tried, Julia couldn’t hold off the outstanding Fife athlete that is Anna Hedley. We claimed a terrific second place, with C Team Campbell, Kate Paul and Zoe Flower in eighth, a few strides ahead of B Team Wade, Valencia Wright and Kate Richardson.
Three girls teams in the top nine has to be applauded. It should be noted that not long ago our B team beat the A’s for silver – we do urge our athletes to just run their best and never mind anyone else … and that’s the thanks you get! Well done and thanks to all who raced on one of the hardest courses anywhere; the officials and course setters; parents, pals and puppies; coaches; the people crewing the chip van; bemused onlookers
Great to see Holly Still back in action on this course as a senior alongside her contemporary and companion on many a podium, Erin Wallace. Excellent ribbon deployment as ever by Caroline Wright of the Flying Colours Squad.  Full marks also to Eilidh MacShannon and Ollie Traynor for the cakes, and to David Chong for forcing me to eat the scone and jam he bought for me at the Garscube Harriers charity stall. Have I already used the word, “Magic”?

See you all at the races.

Thanks Croy for the report !
Some excellent photos available from Bobby Gavin , Video Highlights from Vinco shared by  Scottish Athletics as well as photos on related social media from Club photographers .