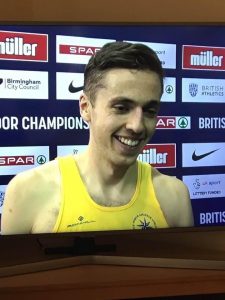 Pride of place has to go to 1500-meter man Gourley, who delivered a tactical masterclass in controlling his race at the start, then shadowing Rio Olympian Elliot Giles before pouncing in a blistering final 50 meters to seize victory in three minutes 44.76 seconds. The win entitles Neil to automatic selection for the upcoming European Indoor Champs in Glasgow next month.

Said a grinning Gourley, “I admire Elliot Giles as an athlete, so I’m delighted with edging him for this title. It’s my birthday week, so this medal is quite a nice present. Better still, qualifying to compete in Glasgow means the world to me.”

Nikki Manson produced a season’s best clearance of 1.80 m in the women’s high jump to take third place behind winner Olympian Morgan Lake, who cleared 1.94m. Manson’s perfect sequence of first-time clearances at 1.71, 1.76 and 1.80 gave her the edge over Edinburgh rival Emma Nuttall, who needed two attempts to clear the 1.80 mark.

Fraser Angus fought through to the 200m final with a superb personal best 21.54 seconds effort during heats and semi-final, but had to be content with sixth in the ultimate race.

Alessandro Schenini leaped to 7.40m and fifth place in the long jump, while Erin Wallace managed the same place in her 1500m heat, only to be pipped by four hundredths of a second for a fastest loser’s spot in the final. In her 800 meters heat, Katy Brown came up with another Giffnock fifth place, which wasn’t enough to see her into the final. 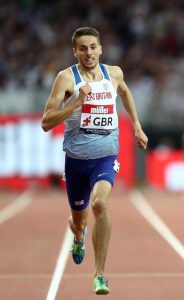 Neil Gourley delivered one of the biggest wins of his career in winning the GB Indoors 1500m. Photo of him in a previous GB appearance 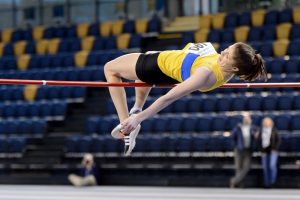 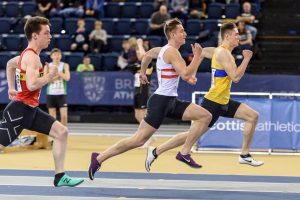