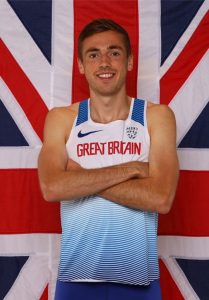 Neil travelled to Dubai to the GB Training Camp and before his Walk and Talk with Athletics Weekly,  he responded to a request from the Club to take part in a Q&A. This was held at Eastwood High School​​​ on the evening of 5th September 2019 after the Middle Distance Squad had trained . 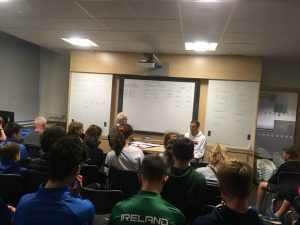 A thoroughly informative and entertaining Q&A was held at Eastwood High School, Newton Mearns, chaired by Dudley Walker and well attended by athletes and coaches. In a full classroom, Neil gave us the benefit of his middle-distance learning to date; insights into his experiences in training and racing in the UK and USA; tips on dealing with pre and post-race emotions; balancing studies and sports; and much more besides.

Q: What was the start line?
NG: “Age nine at a school fun run I was spotted by one of the teachers who suggested I go along to Giffnock North. At Under 11 I was coached by Clare Stevenson, so really it’s all her fault.”

Q: Did you take part in other sporting activities?
NG: “Yes – football, rugby, table tennis, golf and tennis. A bit of everything, I was naturally competitive … but I wasn’t great at any of them.”

Q: What made you stay in the club?
NG: “Great club culture. Good bunch of competitive guys, coached by Gordon Lockie. I loved cross country, and trying to help the team. And the thing was, the more I worked at it, the better I got. Work was always or nearly always rewarded. I put in the effort and it paid off.”

Q: What was the attraction in cross country?
NG: “When everyone’s on the start line, hundreds of you, at a cross country race, everyone has the same right to be there, trying to win.”

Q: Were you always good?
NG: “I was never the most talented boy. I always had someone to chase and I like that.” (Note – Neil’s training group included Grant Muir, who holds the current Scottish U17 3000m outdoor record of eight minutes 34.06 seconds set in September 2010. Grant, Neil and Jack Walker together hold the Scottish U20 3×800 record of five minutes 47.21 seconds, set in June 2012.)

Q: What’s the most important part of your training?
NG: “The most important contribution to your sport isn’t the training. It’s the time away from the track that counts, for example get eight to ten hours sleep. Have a good snack after sessions – I prefer chocolate milk, for the sugar kick plus protein.”

Q: How did you prioritise among your different sports?
NG: “I saw a potential in myself in running. And I realised I had to eventually drop other sports. It was difficult – my dad is a big rugby fan, so giving that up was difficult. There were big conversations and I was upset at giving up football and rugby. But it had to be done.”

Q: How did you deal with stress?
NG: “Badly! One time I missed selection for a West District team and I cried. It’s a big deal when you’re young, but it’s important to feel nervous, it means you care. Before a race I think about my brother, my parents, & all the people who want you to do well. During the race ,it’s you. You’re  the one who matters .

“If you dwell 24/7 on your sport it’s not helpful. It’s good to have distractions. If you have trained hard and done a lot of work, then that’s all you can do. Don’t dwell on it. Just work out what to do better next time.”

Q: Who was your inspiration to go to the USA? (Neil took a sports and engineering scholarship at Virginia Tech, for whom he competed over country and track, and indoors. He is now signed with Oregon Track Club.)
NG: “Chris O’Hare. He did it, with no support.” (Note: Chris O’Hare was a stand-out Scottish junior and remains a world-class athlete, based in the US.)

“I sent twenty, fifty, letters to universities in the States. Some didn’t reply, so they were scratched off the list. I looked at the coaches and facilities. Virginia Tech is good for engineering, which I wanted to study. And they were improving as a track and field outfit. NCAA (National Collegiate Athletics Association) experience varies across the US, I sought advice and did a lot of research.

“I was seeking a balance between academics and sport, and the Professors in the US are more understanding than here when it comes to achieving that balance.

“Travel around the States is ridiculously well supported and the US College track and field set-up is phenomenal … funded by American football and basketball.”

“It’s difficult to do the trans-Atlantic competitions. My coach was and is very understanding about letting me adapt preparation for big GB Trials and so on.

Q: Doesn’t the US system demand a lot from its athletes?
NG: “Yes. You’re not just there to train but to compete and earn points for the college team. I was lucky to be given the right kind of support and wasn’t pushed to compete all the time. I was given scope to recover. The NCAA is great for learning how to race tactically in intense situations.”

Q: How did you cope with studies, plus training and competing?
NG: “I admit it was hell at first, but good to learn the disciplines of time management and working out strategies. Time management is key in balancing studies, training, racing and life. An average sort of day would be:
• Train a.m. before studies
• 4 or 5 classes
• Train p.m.
• Dinner
• Study in the evening
• Sleep – very important, sleep.

Q: You still hold the club U15 3k record … oh, hold on … (Note: at this point Reuben Macdonald pointed out that he now holds the Giffnock North AC U15 Boys record, which he took from Ethan Carolan. How times fly.)
NG (laughing): “I was never one of the top guys in the club – be patient, this sport often doesn’t come to you quickly.”

Q: Were you academic as well as sporty?
NG: “I studied quite hard for results. Mostly I was a good boy, quite boring.”

Q: Did you always focus on middle distance and country?
NG: “At under 17 I thought 3k or steeplechase were my events, though I tried a bit of everything. I’d say test your limits on everything. It wasn’t until I was 18 or 19 that I settled on 15s – my ‘chase was a disaster!”

Q: Tell us who you’re running for now – apart from Giffnock North of course.
NG: “I run for Oregon Track Club, based in Eugene, Oregon, USA. Eugene is sometimes called ‘Tracktown’, so that tells you something about the importance of athletics there. I ran a good 1500 and was approached by my now coach Mark Rowland (Olympic bronze steeplechase 1988, still GB men’s record holder in the ‘chase) and by coincidence my college coach at Virginia Tech was moving to OTC. So when the college coach moved, so did I! Eugene is an incredible place to train and the World Championships will be held there in 2021. It’s at sea level, not altitude – and it’s the hay fever capital of the world!”

Q: How do you deal with disappointment?
NG: “The lows make the highs higher. At Glasgow not so long ago, on the morning of the European Indoor Championships 1500 Final, I woke up sick and dizzy … I couldn’t race the final of my favourite event in my home town, in front of a home crowd. Terrible moment, terrible feeling. But the disappointment fuels determination to succeed.

“Never take success for granted, seize your opportunities, you don’t get many.”

Q: You achieved your 1500 metre goal at the recent GB Trials for the Word Championships.
NG: “The GB Trials were also the GB outdoor track championships, so there was a title and medals up for grabs, and a lot of good athletes competing. After the disappointment of the Euros in Glasgow, I worked really hard. Only two automatic selection places were available at the Trials, and I’ve missed out previously, very narrowly, so I worked really hard in training. I was not missing out again if I could help it. And in the GB Final, with 600 metres to go, I knew Josh Kerr would take it out and he’d move well for the last lap. I knew what he’d do and I thought something would open up in the last 100. And it did.” (Neil won the GB 1500 title in three minutes 44.76 seconds, ahead of two other Scots, Josh Kerr and Jake Wightman.)

“You’ve got to have a Plan A, B and C. Stay awake and if possible stay in lane one as much as you can.”
Q: Who will you be rooming with in Doha?
NG: “Ah, well, good question, that’s interesting, because I don’t actually know. The system is you hand in a list of three people you’d like to room with, in order of preference, and the team officials do their best to match you up with them if they can. The thing is, none of those three people may not put you on their lists!

Q: Why is Scottish middle-distance running doing so well at the moment?
NG: “Laura Muir proved it can be done. People here have realised it can be done. With so many good Scots, you know you have to work hard every day.”

Q: How do big races in the US compare against the GB World Trials?
NG: “The relays in the States were a shared experience. Probably those are my favourites, the team ones are more memorable. The GB Trials by contrast are for yourself and your family and friends.”

Q What’s next, after Doha?
NG: “Tokyo 2020 is what I’m gearing up for. The Olympics hold more meaning than even the Worlds.”

Dudley Walker: “Thank you Neil, for taking the time to chat to us. I know everyone at the club will be cheering you on in your efforts in Doha … and beyond!”
NG: “Thank you, everybody, it’s always nice to be able to give something back to the club that got me started and has always given me so much encouragement. One last thing – one of the big secrets in this athletics game is what my coach often tells me: ‘Just keep turning up’.”

In thanking Neil for taking time out from a busy schedule before returning to Oregon, the club and Michael from Migo Sports gave him that most treasured of athletic items: a brand new Giffnock North hoody, presented by U17 distance athlete Zoe Flower.

Many thanks  to Croy Thomson for recording and reporting on this important occasion .

For more Background information on Neil see our previous post on his breakthrough Season in 2018 which continued in 2019 to the present date and World Athletics Champs in Doha !