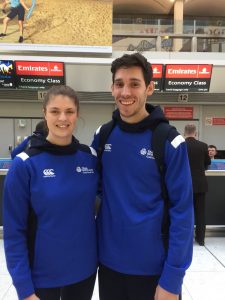 The Club is remarkably proud to have 2 athletes, David Smith and Nikki Manson at the 2018 Commonwealth Games in The Gold Coast.
It’s also quite remarkable that the 2 Athletes are both High Jumpers, both joined Giffnock at age 9,competing for the Club since then and both have been coached in High Jump by Ken Allan . So it’s safe to say that this has made history both for the club and for Scottish Athletics as a whole.

David Smith
Following a period of injury and lower performances, David moved coaches again in 2017 to work directly with Paul Harrison in Birmingham and work in partnership with Ken again.He has enjoyed a great period recently resulting in his Commonwealth Games honours. This, it should be noted, is David’s 2nd CG Selections as he also competed at Glasgow 2014.

Nikki Manson
Nikki, after graduating in Glasgow ,spent a year in the USA College System, gaining All American collegiate status on the way and setting substantial PBs before returning home in summer 2017 to rejoin her first High Jump Coach.

Nikki Manson and David Smith have been members of Ken’s High Jump Squad since they were young teenagers at Giffnock North AAC and they both still wear the vest today. As Ken states,

“They are a wonderful example of hard working , dedicated and high performing athletes, with impeccable standards of behaviour and perfect representation of themselves, their families, their Country and the squad itself. I am so pleased and proud of them and of what we have achieved together over the last 10 years or so.
Can’t wait to get over there and support them in person. 👍😃. ”

We wish Nikki and David all the best in Sunny Oz as they prepare for the Games . We’re sure they will continue to do themselves and their families proud. We recognise the substantial contribution that both families have made to supporting these athletes on their way to the top of their game, recognised in continuing further International selection and also the huge part coach Ken has played in this success.
We are looking forward to getting updates from Down Under as to how things are going with Nikki and David. They have more heights to soar at these Games. 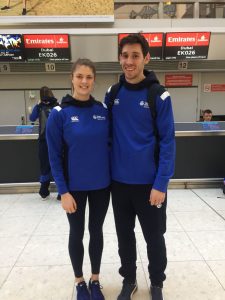