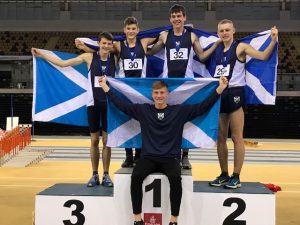 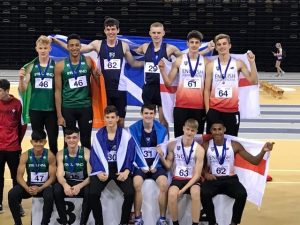 Giffnock had two athletes gaining Scottish Schools vests at the SIAB International Pentathlon Championships at the Emirates arena this weekend – namely 15 Year olds Max McHarg and Murray Fotheringham.
Max led the Under 16 Boys team in grand fashion with 4 PB’s in Hurdles, Long Jump, Shot Put and 200 Metres to leave him in 5th place after 4 events. As a sprinter by trade, the 800 Metres is a foreign language to Max , but he attacked the final event with gusto , chasing a place on the podium. He was looking good after 400 Metres but as the bell approached he was visibly struggling as the lactic kicked in. The last lap must have felt like a marathon to poor Max but somehow he dragged himself round the track for one last time – every step hurting just a little more . Rather unbelievably, he was only just outside his PB but the toll on his body required a lengthy stay with The First Aiders after the race. Max finished as the best Scot in a very creditable 6th Place but his team were just outside the medals.
Murray was stepping up a level this year to compete for the Under 18 Team. Scottish Gold medals at this event are as rare as hens teeth but the Scottish Boys were focussed and started the fireworks early !! Murray commenced with a PB in hurdles but was slightly below par in Shot Put to lie down in 13th place after two events. A PB in the 200 Metres clawed back a little leaving the Scottish team just behind England. The Long Jump was the critical event with the other Scottish boys putting in PB’s to close in on England but Murray fouled his first two jumps. With the pressure on, a huge 6.93 Meters leap catapulted the Scots into the lead by a meagre 3 points. The result was never in doubt thereafter as the Scots outclassed their English rivals in the 800 Metres to score a massive 10,546 points – the best ever score by a Scottish Team and win by over 260 points. Murray finished in 5th place overall with his teammates Scott Brindley winning the individual Gold and Calum Newby in joint 3rd.
Link to full results:

Report and Photos from on the spot, Craig Fotheringham.Thanks Craig