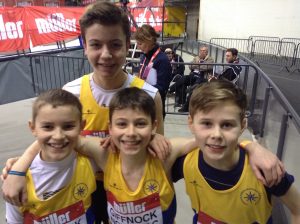 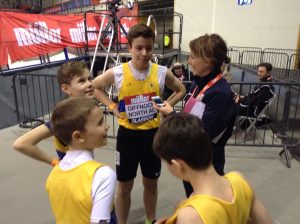 Following XC Success on Saturday, the Clubs sprint squads took to the track at the Connect Relays as part of the Muller Grand Prix at the Emirates and they did not disappoint

It was an exciting day at the Emirates Arena today for the seven 4x200m GNAC junior relay teams who qualified for their respective relay finals three weeks ago, particularly as the finals were part of the prestigious MULLER INDOOR GP IN GLASGOW

Up first were the U13Girls Angelica Mayer, Eilidh Veitch, Catriona Bentley & Josie Reilly (Leah Rigley) The girls got off to a great start and were always in contention. However, despite giving their all, they were just pipped for 3rd place behind VP/Glasgow, despite an improvement of over three seconds from their qualifying time, finishing in a time of 1.56.82.

The U13Boys were up next.We had two teams in this final with the A team of Finn Duncan Brooke, Euan Thomson, Frankie Bradley & Josh Thielan Mann and B team consisting of Scott McMillan, Elliot Baxter-Seabrook, Ben Hughes & Ryan Davie ( Daniel Martin & Josh McDowell). The A team took a demanding lead and won their race with a time of 1.56.04, less than a second off the current club record. Meanwhile the B team were not far behind them and they finished third just behind Inverclyde in a time of 2.01.82.Strength and depth in that squad.

The arena was buzzing as the excitement built, next up were the U15Girls Iona Denholm, Mary Rose Cairns, Niamh Smith & Ella McGregor( Olivia Dykes) At the end of the first lap it was pretty close and although the first two girls had done their utmost, by the second change, our girls were lying fourth. With Ella McGregor then giving chase, the VP/Glasgow B team dropped the baton.This seemed to also unsettle the Edinburgh AC Team, spurring Ella on. She took full advantage and managed to get back in contention in the back straight. As they raced on Ella edged in front of the Edinburgh AC athlete finishing a deserved third.It then transpired that the VP/Glasgow B team were disqualified ,our girls were promoted to second and were delighted to be going home with the Silver medals.
The U15Boys also had the advantage of two teams in the final, the A Team was made up of Jacob Luc(who was part of the winning U15Boys team at the National Cross country on the Saturday) , Max McHarg, Cameron McKerrow & Michael Foley & the B team consisted of Joshua Emanuelle, Gordon Wylie, Aiden Cunning & Ross Gourlay (Ben McCahill) The A team were justified favourites and quickly went into the lead, comfortably winning the race in a sub 1.46 time. The B team gave it their best but finished 5th despite their valiant efforts. Just as we were enjoying the success of the boys winning, it was announced that they had been disqualified – a disappointing shock for the athletes and the parents who cheered them on. However, is they are now looking forward to securing the Gold medal at the SAIL relays on the 17 March .

As our U17Men didn’t make the final, the last to run for Giffnock were the U17Women A team, consisting of Rachel Callan, Eve Denholm, Rosie McKay & Freya Cowan. It was a very close race from the start. With 4 clubs in contention at the first change, Eve Denholm managed to take the team into second place but there was still a long way to go. It was a hard and fast race and although the girls gave their best they just missed out on a third place to Dundee Hawkhill.

Thanks to Billy Glasgow for the report and Jackie Alexander, Coach and Team Manager ,U13Boys for the photos.

Grateful thanks also to our athletes who were part of the Kit carrying team at the Grand Priz
Freya Cowan, Rosie McKay and Rachel Callan straight from running in the Relays and Niamh McWilliams, Orla Lang, Donald MCLean, Abby Thomson, Jill Carswell, Iris Williams , Jennifer Dallas,Leila Hickey Fugaccia .
Reuben Nairn , Murray Fotheringham and Clark Marshall representing the GPVS [Glasgow Pole Vault School] on this occasion.
They did an outstanding job and nobly restrained their desires to get autographs etc from the elite athletes until the conclusion of the event.