Edward Joyce, Daniel Martin, Felix Chan & Euan O’Brien U15 Boys with one of the well deserved cheques from the day

National Relay Championships – U13 – U20

Following on from a fantastic performance of winning gold in the U20/Senior Men & Silver in the U20/Senior Women National 4 x 200m Indoor relays on 1 February, we were delighted to hear that the Under 20 women ran a new Scottish record time of 1.42.43.

Not to be outdone, the younger age groups, all competing for places at the final to be held as part of the Muller Grand Prix on 15 February, managed to qualify a team in every age group final, and two teams in both the U13 girls and U13 boys age groups!!

We then witnessed outstanding and dominant relay performances from all the Giffnock teams at the Club Connect Relays finals at the Emirates, prior to the Grand Prix on Saturday 15th February. Every team in a final medalled – we think a first for Giffnock North!!

The final tally was:

U13 Girls​ Gold and Bronze

U13 Boys​ Silver and Bronze

Thanks to the various team managers for the following reports and photos. Taking them in order of competition……

The two U13 girls teams, which included two very enthusiastic reserves, were bursting with excitement and energy from the moment of arrival. Despite having to wait in a queue for the toilet behind Gabby Logan, they kept their nerve and delivered a performance exactly as they had in practice over and over again. There is no one athlete that can be singled out and the proof is in the depth of the sprints squad.

So ……. to the A team of Emily, Madeleine, Caitlin and Helen who romped home in gold position, leading from the start…we are all so proud of you. And our B team, who absolutely pushed Edinburgh all the way to gain us a bronze medal …….we are thrilled! Leilani, Isla, Sarah and Hannah you were all stars. The fact that we had reserves in Maisie  and Poppy warmed up and ready to step in gave us the confidence to pull out all stops.
The U13 Girls 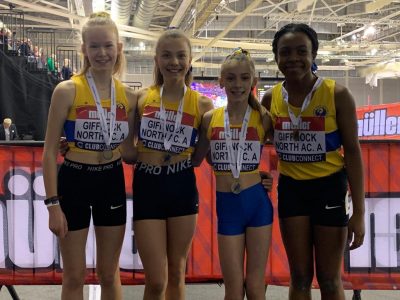 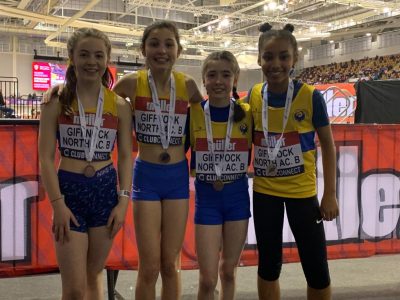 Like the U13 girls, our two teams, plus two reserves, were eager to get out on the track and try to get medals! Martin Rolfe, Bobby Kiltie, Euan Armstrong and Zander Summerhill put up a great battle but were narrowly beaten by VP Glasgow. They finished in a season’s best time of 1.55.37 with the B team of Lewis Davidson, Oliver Bryers, Aaron Reid and Alfie Bradley winning the battle with Musselburghfor third place and the bronze medal. To our two reserves, Aaron Muir and Abraham Al Ani, a huge thank you……..for warming up with us, practicing baton changing and being ready should we have needed you. 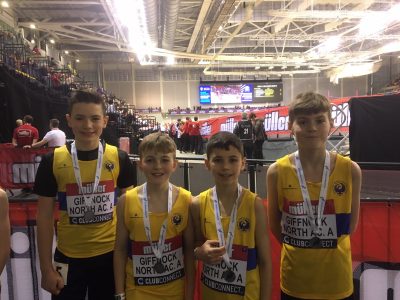 The A team with their silver medals Zander, Bobby, Martin and Euan

The B team with their bronze medals Lewis, Aaron, Oliver and Alfie

Even Storm Dennis couldn’t dampen the spirits of the Giffnock North athletes. We gathered outside the Emirates Arena seeking cover under a bike shelter from the driving rain and howling wind, the athletes themselves looking forward tothe day after so much training and preparation going into the event. The team themselves ready to take on the Best of the Rest.

The U15 girls, supported by their parents and the fantastic Sophie Ferguson and her Mum (giving up some time from her birthday celebration to support the team) were outstanding. It started with Angelica Mayer, who within 100m had the team in the lead, Eilidh Hunter then took responsibility to stay ahead which she did superbly, handing over to Emily Watson.Emily stretches the lead with confidence and handed over to Erin Ramsay who elegantly and with style, took the team to a Seasons Best finish and the Gold medal.

Throughout the heats the girls improved on previous times and comfortably brought home the Gold Well Done Girls !! 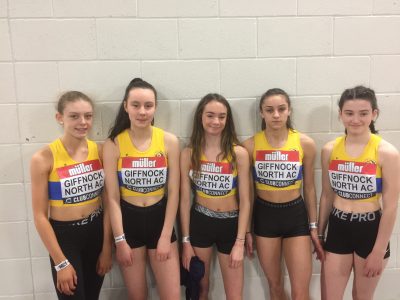 A fantastic run from the U15 boys from start to finish. Euan O’Brien, Daniel Martin, Felix Chan and Edward Joyce. Also well done to the two reserves on getting the team to the final. Daniel Whyte and Ryan Davie

It was now the turn of the U17 Women. Alyson Bell got the team off to a great start despite strong opposition from VP/Glasgow & Pitreavie. She handed the baton over to Caroline MacConnell who maintained a slight lead going into the changeover to Brooke Moran, who tore off as a tiring Caroline gave her all to ensure the change occur within the proper change over zone. To the relief of her cheering support,she had succeeded. Brooke ran a strong leg albeit there was no margin for error as the aforementioned teams were in hot pursuit.
The last changeover was really close between all the three leading clubs & Amy Greene gave her all but the chasers from VP/Glasgow & Pitreavie struck going into the second bend before the finishing straight and they just edged it withPitreavie taking gold. Amy secured the race by finishing a clear 3rd with a bronze medal for Giffnock. 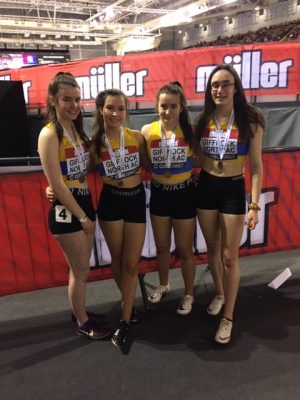 The last relay race of the day was the U17 Men. Giffnock had made it to the podium in every other age group, so no pressure! Daniel Boyle, Jacob Luc, Joy Majumdar and KhaliqKelani each ran a great lap and it took the photo finish to decided the silver and bronze medals between us and VPGlasgow. Alas, VP had thicker vests than us and were awarded silver. We secured bronze, but only 2 hundredths of a second behind VP. Congratulations to Inverclyde who were the runaway gold medallists. Every relay team is bigger than the 4 guys on track. In the qualifying round, Tom Stewart had been part of the team that secured our place in the final, but due to illness, had to withdraw. Joy stepped in to run third leg in the final and as a squad, we knew we still had quality back-up from Aidan Cunning as reserve, should anything have gone wrong on the big day. Well done all of you. 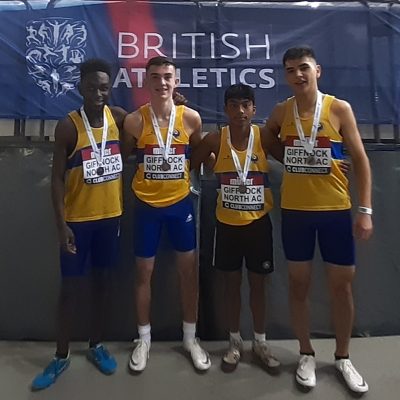 Giffnock North was awarded Track and Field Club of the Year 2019 in November at The Scottish Athletics Awards dinner and it looks like 2020 has started out just where we left off.

Here’s to a great outdoors season.