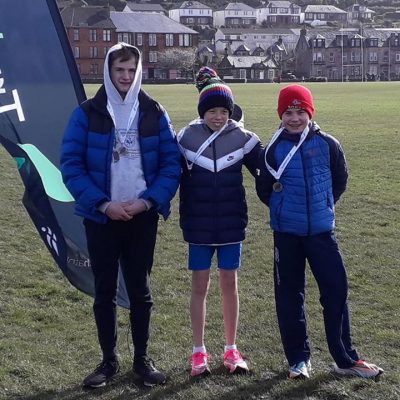 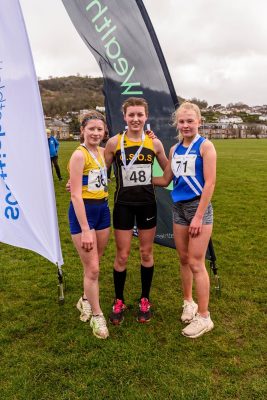 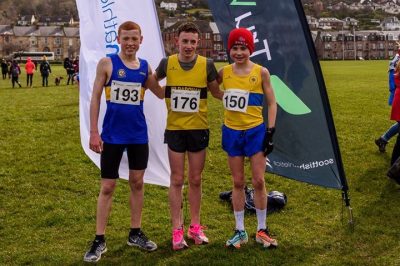 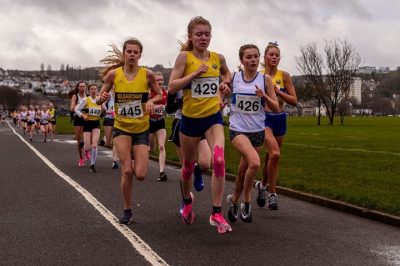 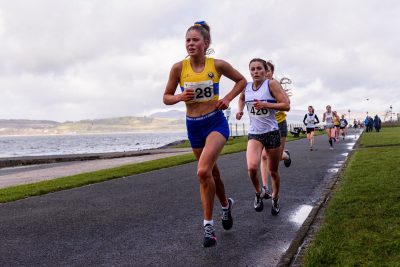 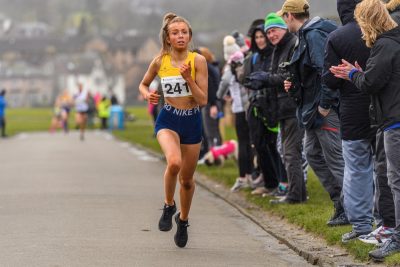 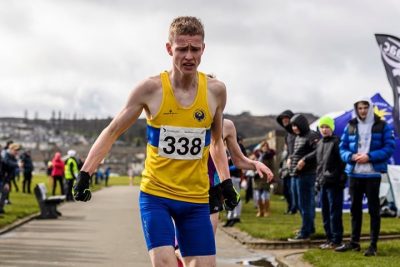 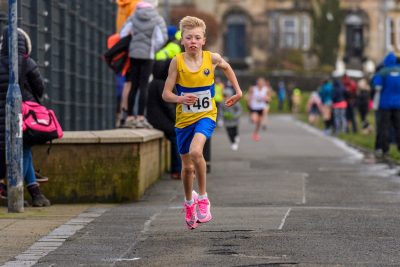 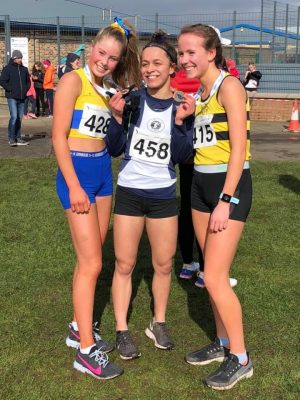 Photos courtesy of Bobby Gavin & Coaches
Major applause to all who competed – three national team titles, a team silver and six individual medals is a good day’s work at the end of a long, hard winter. One team indivisible – everybody counts.

At a wind blown but mercifully dry Battery Park in Greenock, Giffnock’s U15 Girls flew to the team title with Hannah Ryding outgunning team-mate Valencia Wright for first and second. Isla Scott nailed the b
National road race team gold with a strong effort for tenth over 4.2k.

Under 15 Boys Reuben Macdonald, Cameron Deverill and Cameron Green were pipped for the Scottish team title by one point by an impressive Central AC trio. Reuben conjured up a blistering finish to snatch silver behind Central’s Conor Bell, and was brilliantly backed over the 4.2k by the two Camerons in seventh and twelfth. Great to see Cameron Green getting back to his best after so many injury setbacks.

Third race of the day was U13 Girls’ 2.5k and Katy Donnelly ran strongly for a fine silver, headed only by National XC champion Millie McClelland-Brooks of Glasgow School of Sport. Hazel O’Donoghue and Amber Wade completed the team for fifth place.

Craig Shennan fought hard for the full 2.5k in the U13 Boys’ event but Kilbarchan’s Oliver Patton proved too strong ilon the day. Craig did lead team-mates Alasdair Nugent (4th) and Cameron Harris (8th) to the National team crown ahead of Kilbarchan. Oliver Bryers, Oliver MacDonald and Jack Wallace also finished one the top fifteen.

As the sun came out on the Renfrewshire Riviera, Giffnock’s Under 17 girls outshone the competition with the club’s third team victory. Julia Cash pulled through strongly as the five hard kilometres went by and claimed a well-earned bronze. Zoe Flower delivered and excellent fifth place and Charlie Frew ran home 17th to clinch the medal, ably backed by Miriam Gilbride.

The U17 Boys brought proceedings to a close, on what might be the last official race for some time. Illness saw Giffnock’s team depleted, but Blayne Wright with a notable effort for 11th, Ross O’Brien 16th and Charlie Tomkinson 34th gave the club another top five finish to bring a highly memorable winter’s racing to a close.

Well done everyone who competed, coached, officiated, marshalled, supported, sponsored, cheered, wrangled the tent in a high wind and generally helped make this wonderful sport possible. Especial thanks to the organisers for going ahead in testing times, and giving the young athletes every opportunity to shine.