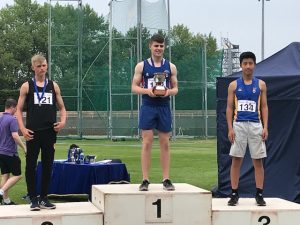 Max McHarg on the Podium 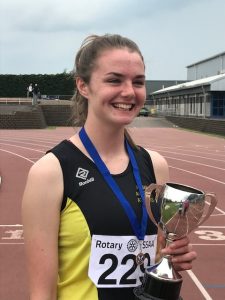 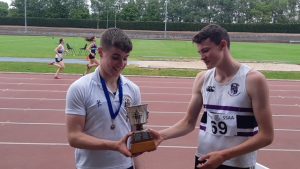 The Murray to Max Exchange

The Scottish Schools Combined Events Championships took place at Grangemouth on Saturday 2nd June 2018 with Max McHarg and Murray Fotheringham (both aged 14) ,our only first claim participants. Max and Murray were both Gold medallists last year at these Championships in the Under 14 (group D) and Under 15 (Group C) age categories but both were stepping up an age group this year – Max to Under 15 (Group C) where he remained one of the favourites and Murray to Under 17 (Group B) where he would have to do battle with some considerably older boys! Despite the forecast for cloud followed by heavy showers , the sun was splitting the sky at Grangemouth and the athletes had to seek shade whenever they were not competing.
Max started well with 2nd place in the Hurdles in a new PB of 12.33 seconds. His Long Jump is his weakest event and, slightly down on His PB , a leap of 4.80 Metres left him well behind the leaders down in 5th place overall. However, he then threw in 2 personal bests in the 200 Metres (23.71 seconds ) and 11.30 Metres in Shot Putt to win both events and jump into the overall lead. He tracked his closest rival in the final event before outsprinting him in the home straight for another event win in 2:15.16 and yet another PB. His overall score of 2820 gave him the Gold by a significant margin and the “Murray Cup” returned to Clarkston for another year after a brief 9 hour “holiday” in Grangemouth .
Murray meanwhile had started well with PB’s in both Shot Putt (9.64 Metres) and 100M Hurdles (15.51seconds), but still trailed significantly down in 9th place. His good events, however, were still to come and a huge 6 .82 Metres legal PB for second place in the Long Jump pushed him up to 4th place. A third place in the 200 metres with yet another PB in a time of 23.97 pushed him closer to the podium in terms of points but still 4th Overall. A blistering solo run in the 1500 meters saw him win the final event by over 20 seconds in a time of 4:30.27 which pushed him into Bronze medal position with a Giffnock Record Score of 3312 points.
Second Claim member Nicole Proudfoot was delighted to triumph in the Under 17 (Group B) Girls after a long injury lay off . She scored very consistently throughout the day and received great support from her coach John Birkett.
Also staged on Saturday, in an attempt to ease the congested program for next Friday and Saturday, were the Scottish Schools Hammer and Steeplechase events. Full Final results/times are not yet posted but 3 Giffnock girls attempted the steeplechase – a tortuous event! Jill Carswell and Helen Chong trailed behind Emma Chamberlain until the last lap where Emma’s valiant attempt faded with 400 to go and Helen and Gill both passed her with Helen winning the Bronze medal and an outside chance of a Scottish cap at SIAB next month.
History has a habit of repeating itself and in the Schools ”4 by 100” metre relays at Hutchie the day before , Max anchored his Hutchie Under 15 team to Gold whilst Murray ran last for his Glasgow Academy Over 17 Team bring them home in third place and a Bronze. In the 4 by 400 relay, Annabel Ballantyne and Eve Denholm running for Glasgow Academy brought home another Bronze. The next day at Grangemouth, in the midst of the Combined events competition, the Primary Schools relays took place. As this report is finalised I have not seen final results for either the Senior or Primary School relays but many Giffnock North athletes competed and may well have won medals or made the finals. I am aware Mearns Primary just missed the podium with a 4th place represented by Emily Watson, Eilidh Veitch, Tara Menon and Eilidh Hunter. Trying to keep track of Giffnock athletes when they are not wearing the Blue and Gold is almost impossible, so I am unable to provide a full commentary on the relays. Well done to all who competed and apologies for any omissions.

Grateful thanks to Craig for this report and photographs!! Welcome Development in Combined Events at the Club