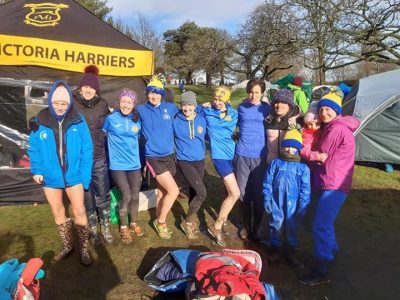 Winter in Scotland is notoriously unreliable weather wise, and Saturday 22 Feb proved no exception as snow, hail, wind and wee snatches of sunshine appeared for the National XC at Falkirk. An altered course due to flooding gave the ladies an easier start than in previous years, with the hill from the House omitted. The first lap was run in testing conditions with decent sized hailstones being driven by a fierce wind onto exposed flesh. Many runners made their discomfort known vocally as they ploughed through mid calf level puddles and long stretches of thick mud, churned up by the spikes of the youngsters in the preceding races. Thankfully the sun came out and a break in the weather made the following 2 laps more pleasant to run in.
For Giffnock North Yvonne MacNairn and Jill Smylie continued their close competition, each leading the other in various points of the race. Yvonne finished slightly ahead after the 10k in 20th, with Jill only 2 places behind.
New rules meant that it was 6 to count rather than 4 in previous years, so Allie Chong (66th), Nicola Macbeath ( 92nd), Jacquie Campbell (106) and Kathleen McLachlan (107) made up the team.  Interestingly only Gala harriers lost out to this new rule – they would have finished 5th instead of 7th if only 4 athletes counted. The new rules from SA reflect the increasing numbers of women taking part in XC running. In all 10 senior women crossed the finishing line, hopefully helping to win the Lindsay trophy again for the club!