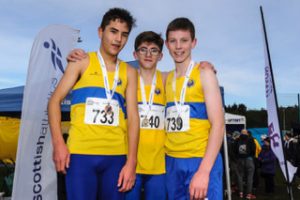 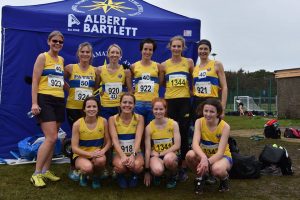 Taking pride of place was the Under 15 Boys quartet of Chris Perkins, Harris Paterson, Jacob Luc and Ross O’Brien who stormed to the first four places in their 2k event. Just seven seconds separated all four at the sharp end of a blisteringly fast race over the ultra-flat, super-fast circuit, with Paterson and Perkins swapping the lead more than once before the latter claimed victory with a five minutes 57 seconds effort.

Meanwhile on Sunday 11th November several U11 Athletes made the journey to compete in the Springburn Harriers Schools XC series and performed really well.
We had 2nd & 3rd place in the P5 Girls =race with Aneesha King Oubacha and Beatrice Nairne and Mathew Snowden in 3rd Place in the P6 boys Race while Oliver Bryers took 2nd Place in the P7 Boys race. It was great to have all these athletes getting another XC run before the Renfrewshire Champs on the 25th November and some are planning to do the Livingston Open or Garscube Harriers School races on the 18th.