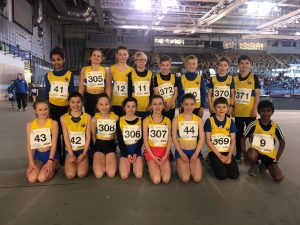 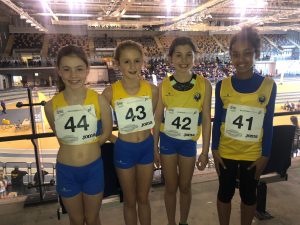 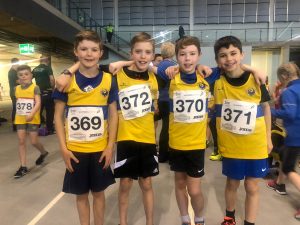 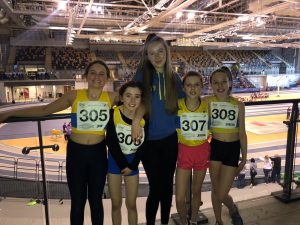 A fantastic day was had by all at the SUPERteams. Giffnock North had four teams competing, two boys and two girls teams. All athletes compete in four events: long jump, shot put, 60m and 4x200m relay.

With 132 teams and over 500 athletes from throughout Scotland competing, the atmosphere in the arena was electric. Our athletes did us proud, supporting each other, working as a team and giving it their all. There were PB’s achieved and friendships formed. For some of our athletes it was their first experience at an event of this scale.

Speaking of their experience of the day, the young athletes commented on how much fun they were having, enjoying the opportunity to get to know their team-mates, as well as the encouraging atmosphere in the arena with comments added such as “you’re so focused on running but you can still hear everyone cheering you on”. The day was “really competitive” and “we worked really well in a team”.

Rachel Callan, young athlete volunteer advises “At this age it’s too early to specialise, they just have a go at every event to find out what they enjoy the most”. The boys enjoyed the multi event nature of the day, and stated they are “happy to do all events”, however one reported ” I don’t see the point in long jump, it gets your feet sandy”!

Special thanks to Edie Campbell, Giffnock North athlete, who kindly agreed to step in to help Cumbernauld boys make up a team.

Lots of highlights throughout the day with many personal bests being set, with the Boys A team achieving the fastest 4x200m relay time of the day.

Thanks to all of the coaches, officials and volunteers for organising and making the day run so smoothly.

Special thanks also to Finlay Weir and to James Turnbull and to Rachel Callan as our ace Team Managers on the day .
We also need to thank all the officials and organisers from Scottish Athletics whose superb organisation saw a slick but overwhelmingly enjoyable event for all the participants.