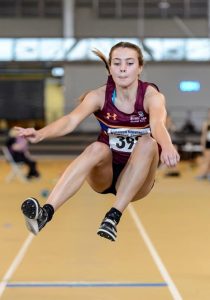 A number of outstanding performances on display at the SUCA and SSAA Championships from Giffnock Athletes as reported by Croy Thomson & Billy Glasgow! First of all the SUCA success

TOP CLASS PERFORMANCES FROM OUR ATHLETES AT UNIVERSITY

RACHEL ALEXANDER, competing for Strathclyde University, won the ladies long jump title at the Scottish Universities Indoor Championships last Saturday in Emirates Arena. Rachel’s 5.97 meter effort set a new championship best performance and she is now turning her attention to this weekend’s British Universities event in Sheffield. Well done to all our other athletes who turned out for their universities, including mentions with distinction for:
1st 200m Sect 1 Final Calum McWilliam Glasgow Caledonian 22.73

So well done to all the University Students and also to all the GNAC medallists at the Schools Championships listed below. Two Double Gold Medallists heading that list.

Great work from all our athletes representing their schools and Universities !All the best to those competing at the British Universities at the weekend!