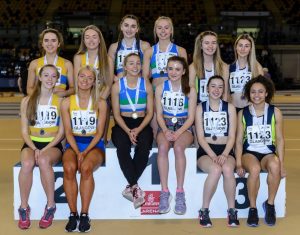 Giffnock North Senior Women 4x200m Relay team won silver medal at the National Indoor Relay Finals at the Emirates Arena on Saturday 16th Feb. The gold was taken by Victoria Park. The girls – Holly Shearer, Freya Menzies, Megan Busby and Rhea Campbell – making a shrewd tactical change to the running order for the final  to set a new club record (1.43.31), having already smashed the previous record in the qualifying round. It was a victory tinged with disappointment. In the warm-up one of our A team athletes had to pull out through injury. To cover this loss one of the  B Team had to step up to the A team and alas without any further cover the excellent B team was unable to run.

Next up it was the turn of the younger age groups to try and qualify for the Club Connect 4 X 200m Relays Finals-FPSG scottishathletics Indoor Relay Championship Finals incorporated into the European Indoor Championships 2019. 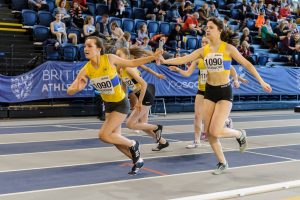 As you can imagine the 4 x U13 girls teams were very enthusiastic and raring to go, not surprising given the numbers involved their first target was to qualify for the semi-finals. Following some great runs from all our girls, all 4 teams qualified for the semi-finals as detailed in the results Next up it was the U15 girls who also had to qualify for the semi-finals and not to be outdone by their younger athletes all 3 teams qualified for the semi’s, as you can imagine the atmosphere was electric. The next to compete were the under 13 boys and given the girls performances the under 13 boys were under a fair bit of pressure however the “A” team quickly secured a place in the final finishing 1st in their heat. Despite a good run by all in the B team they just failed to qualify for the final but the experience will stand them in good stead for the outdoor season.

We only had one under 15 boys team but they also performed fantastically well and comfortably secured a place in the final by finish fourth overall in their age group. The next event was the U17 women’s 4x200m and a good time was anticipated, needless to say we were not disappointed the U17’s comfortably won their race and qualified for the final with a new National & championship best time of 1.43.38, which has still to be ratified. Unfortunately despite a great run by the B team they just lost out in qualifying for the final.

The last of the heats involved the U17 men and as anticipated the A team won their heat and qualified for the final. Not to be outdone, the B Team put in a Herculean effort and were also secured a final place as one of the fastest runners up. As you can imagine the girls semi-finals were eagerly anticipated but first up it was the senior women’s final.

With 5 teams already secured a place in their respective age group finals we were looking forward to the Semi-finals for the under 13 & 15 girls and were not to be disappointed, all the girls were brilliant and gave it their all in very competitive races, resulting in both A teams for each of the age groups achieving a slot in their respective age group finals. It was a very successful day and could be a tough act to follow but we are all now looking forward to the finals on the 1/3/19.

National Indoor Combined Events Championships
Congratulations to Murray Fotheringham who took Gold in the u17 Men’s Heptathlon.  Murray accumulated a new club record points total of 4785 pts and also a new pb and club record of 2.04m in the high jump. In the u15 Boy’s event Daniel Martin took a bronze medal with 2286 pts and Ryan Davie was 4th in the u13 Boy’s event.  Apologies if I have overlooked anyone.

National Indoor Masters Championships
Congratulations to Angela Kelly who took double gold in the 60m & 200m W55 category and also to Colin Wyrlie who won a bronze in the M45 400m in a time of 60.97.

British Universities Indoor Championships
Long jumper Alessandro Schenini took a brilliant Silver Medal at BUCS Champs with a leap of 7.56  (Scottish u20 record) which is a Euro Juniors Qualifying Distance and will earn him a place on All time Scottish Rankings ! Well done Alessandro from all at Giffnock North ! And he won also Silver in 4x200m Relay with Fraser Angus for Strathclyde University.  Well done Team.