A massive well done to the three Giffnock North athletes competing for GB at the under 20 European Championships in Sweden at the weekend. Alessandro Schenini qualified for the long jump final and finished in 11th place just one place below compatriot Stephen Mackenzie. Erin Wallace easily qualified for her 1500m final in a slow second heat. In Sunday’s final Erin was placed 7th. Fraser Angus competing as part of the men’s 4x100m team was unlucky not to get a medal as the team was edged into second place by Germany, but were later disqualified for a change over violation.

Despite wholescale withdrawals and numerous changes to our team on the day and not filling 10 team slots we managed to finish in runner up position on the day and are now in second place overall with the final match to come on 31st.August in Grangemouth.

Giffnock got woff to a flyer in the opening event of the day in the high jump where David Smith only started jumping after everyone else had bowed out. He won the competition with a leap of 2.10m.  Nassir Salim heading the B event with a leap of 1.85m.

In the short sprints Scott Wylie and Kyle McLean shared the spoils with Scott winning the 100 and Kyle taking the tape in the 200m. They followed each other home to take maximum points for the club.

In the 400m Ross Veitch took 4th in the A race with Eoghan O’Donnell placing first in the B race. The 800s saw superb efforts from Eoghan and Donald Mclean gather very valuable points for the Giffnock cause.

Blayne Wright, still suffering from jet lag following his recent transatlantic trip and Kian McConville were our men in the 1500m event and both worked their socks off to add to the club points total.

The 5000m proved a real test for our distance guys, Andrew Love and Kieran Killen had very warm conditions to contend with in the 5000m but they both stuck to their tasks to augment the points tally.

Nick Boyle just offered a wry smile when asked to race 3K over a few barriers and some water jumps. Massive applause to Nick who performed with style.

In the field Neil Hutchison was our main man as he worked his socks off in the Long jump,Shot and Discus.

I can’t compliment the boys enough with their fantastic attitude and willingness to do their very best for the club. With one match to come at Grangemouth on 31st.August we must turn our the numbers and the quality to ensure we achieve promotion to Division 1.

Run the Blades Half Marathon 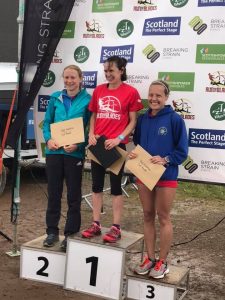 Many congratulations to Jill Smyllie who took second place at the Run the Blades Half Marathon, which took place at Europes largest onshore wind farm, Whitelee Wind Farm near Eaglesham.  Jill came home in a time of 1.30.12 behind winner Olympian, Freya Ross.