A number of club athletes made the long trek down to Bedford.  Reuben Nairne took the under 17 men’s pole vault title increasing his Scottish record by a further two centimeters with a fantastic leap of 4.72m..  Also under 17,  Murray Fotheringham brought home two medals, a silver in the long jump with a 7.22m performance and a bronze in the high jump, clearing 1.99m.  Other Giffnock performances saw under 17 Finlay Waugh, 5th in the final of the 200m in a time of 21.79. Isla Fotheringham was 8th in pool 2 of the under 15 girls Pole Vault with a club record jump of 2.61m. Zoe Flower came in 7th in the u15 girls 1500m final. 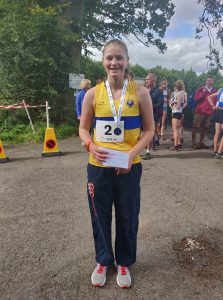 In Falkland, Fife,  Miriam Gilbride gained a National title when she won the under 17 Scottish Mid-Trail Championships in a time of 22.13.
In the under 13 event, Calum Chong was second.  In the Senior Men’s event,  Jordan Orr was 26th, Michael Cross 30th, and Ted Gouley 39th from the 112 finishers.

At the last match in Grangemouth of the Scottish Men’s League the Giffnock team put in some stella performances to win the match and gain promotion back to Division 1.  The final league points total put us second just one point behind Lasswade.  Maximum points were gained in the Javelin with David Lees throwing 47.37m and Neil Hutchison, 39.51m.  Long jumpers Joseph Connelly and Adam Deverill also put maximum points on the board, jumping 6.60m and 5.57m respectively.  Many thanks to all the athletes, officials and team managers who have supported the team over the season.