Star of the show for Giffnock was Daniel Martin who took the under 15 Boys title with a points total of 2784 pts.  In the process throwing a Shot Putt u15 club record of 11.02m.  Matthew Snowden was 11th in the u13 Boys event.

Not to be out done, some of our not so young athletes were also bringing home the medals in the Indoor Masters Track & Field Championships. Ruairidh McLean clocked a very creditable 2.07.78 to take the Silver medal in the M35 800m. Colin Wylie bettered his own 400m club record to win Bronze in the M45 400m and possibly our oldest ever track performer, new member David Edelman, who took a Silver medal in the 60-64 class of the 60m.  Also competing was Colin Black, M35, who clocked 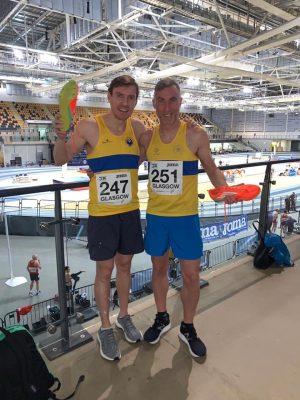 Giffnock teams again showed their strength in depth at the 4x200m Indoor Relay Championships. Our Senior Men’s team of Ross Veitch, Scott Murray, Murray Fotheringham and Findlay Waugh clocked 1.29.31 to bring home Gold and our Senior Women’s team were just edged into Silver medal position by Edinburgh AC. The team was Eve Denholm, Katie Foss, Leah Keisler and Rachal Callan.
The younger age groups were fighting it out for final places.  Finals will be run at the Muller Grand Prix on the 15th February.  Both boys and girls under 13 teams qualified two teams with u15G, u15B u17G and u17 Boys qualifying one each.  That’s some going boys and girls, good luck for the finals.

We hoped it would not be the Wild Windy Wet Renfrewshire Road Race Champs and we would get the balmy picturesque sunny Costa Clyde as sometimes happens( occasionally, very occasionally)  but the weather forecast was accurate and the Battery Park was certainly battered with sheets of cold rain driven by an icy wind. 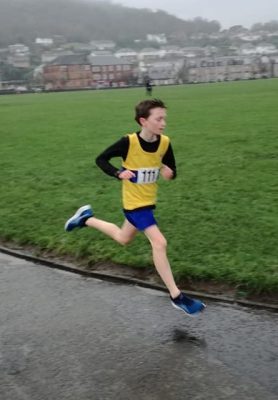 Some of us remember the RR Champs used to be held in the more sheltered grounds of the IBM factory when that  company sponsored the  Spango Valley Club. Or was it more sheltered?

A clutch of great performances were achieved however, and that made the near hypothermia worthwhile for the Giffnock teams present.

“Hats off (or maybe just keep them on since the weather was so awful!) to all the junior athletes at Battery Park today. It takes strength of character to pitch up and run in that, so a big pat on the back to one and all. Some fine performances. Now relax by the fire and congratulate yourselves on a day well spent “

And our roll call was:

U11 Boys Gold, Patrick Fraser 1st, and Team Gold for U11 Boys with Finlay Laskey in (5th place) and CalumDick (in 6th)

U13 Boys Gold for Ist placed Alasdair Nugent and Silver for Calan Chong. Gold Team Medals for U13 Boys  with Oliver MacDonald in 4th.

With our U17s not featuring at the Road Races this year and many of our athletes focussing on Scottish Schools Indoor Champs this week, it was on to the Senior Races buffered and  battered as they made their way along the Esplanade to take part in the 1st event of the Club’s  internal Endurance Champs.

Well done to all the gritty Greenock athletes

Grateful thanks to all the Organisers, to Cameron Spence and his Team to Gerry Gaffney and Inverclyde AC who hosted this event ensuring hot soup and home baking in the Yacht Club to cheer the frozen . A special mention to all the officials who endured it all including our own still smiling starter Doleen Galbraith and Jim Galbraith augmented by Sheila Lewis and some additional Giffnock stewards. Job done!