The young Athletes in the club had their Xmas Disco and Awards night on Friday 7th December in GHA.
This was a great event, well enjoyed by all the athletes and also by the coaches, helpers and parents who came along to see the fun.
The Awards presented at this event were 1) Certificates for all the U11s who have competed for the club on the Track at the SAIL [Scottish Athletics Indoor League ] last winter , the CSSL in the summer, 2) the Star Track event we held in the Emirates and, of course 3) for those who like the mud ,who turned out to compete for the Club at XC at the Renfrewshire Cross Country Relays and XC Championships as well as some other schools XC events.
We also recognised all the medalists Gold,Silver & Bronze in all 4 events contested at the Club Championships in September.
4) Finally, Awards were also presented to the U11 Athletes of the Year Male and Female.

We were honoured to have Nikki Manson, our superb High Jumper, present the Awards to the athletes on the night. Dudley Walker our great MC , explained in his introduction of Nikki her early start in the club, the range of events she competed in as an athlete from Middle Distance to Thows to Sprints to Jumps before finally settling on the High Jump as her preferred event. He suggested the young athletes should check out the huge array of Club Records which Nikki holds, at all Age Groups, in all these events, before outlining her National and International career as a High Jumper reaching the position of becoming the Scottish HJ Record Holder with her 1.90 Metre Jump. Nikki came along in her GB kit which she earned representing GB at the European indoor Championships when she and David Smith the club’s other prestigious High Jumper were both in the British Team. Both have also represented Scotland at the Commonwealth Games.
Dudley had brought along a measuring tape and with the help of one of the youngsters displayed what an achievement Nikki’s soaring 1.90 was. It was great to have Nikki there. She spoke to the athletes, shook all the hands , handed out the medals and certificates and patiently dealt with the queue of requests for signatures and selfies. Thankyou Nikki from all at the Young Athletes Disco & Awards Night and also from all at the Club for the experience of seeing your continuing development in your GB Scottish & Giffnock Vest.

Dudley had a very busy weekend : MC for this event, taking his squads to the West District XC Championships on Saturday, followed by another gig at the Main Awards Night on Saturday evening. Grateful thanks to him for generously giving his time.

Well done to all our athletes , those who have moved on to U13s, those still with the U11s and those who have recently joined us .
All the coaches and helpers think we have a great bunch of keen and enthusiastic Athletes to celebrate and the dance floor antics certainly underlined that. We had several athletes who were late due to being at their dance exams but who gave an impromptu display and then had everyone join in including coaches and helpers. Craig Armstrong led the Arm Wrestling competition in between dances . We don’t think he let anyone beat him. 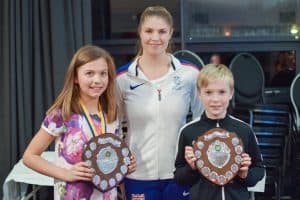 A great event for the youngest of the future Club athletes.
We have to thank properly the following members of the Junior Committee who organised the night and did a great job especially ensuring the DJ and the always welcome Pizza delivery.
Lynda Scott, Tracey Davie & Alison Watson
Additional thanks to Emily and Eilidh for the service at the Juice Bar
A special thanks to James Turnbull , dad to Hannah who came and took all the photos on the night.
In conclusion the U11 Coach Team on the night of Craig Armstrong, John O’Donnell, Steve Taylor, Clare Stevenson and Andy Munro would like to thank our band of parent helpers ( soon to be coaches we hope) for their input on the night and at sessions.
Patricia Gallagher, Gillian Pollock, Gillian Gallagher &a Jennifer Jackson